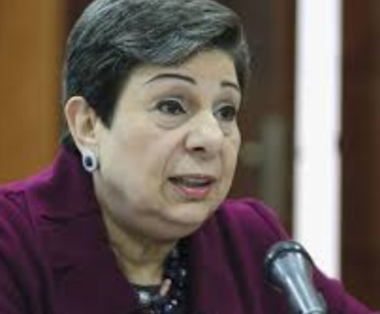 Dr. Hanan Ashrawi, a member of the Executive Committee of Palestine Liberation Organization (PLO), issued a statement strongly condemning the ongoing field executions carried out by Israeli soldiers on military roadblocks across the occupied West Bank, especially when the soldiers refuse to allow medical treatment to wounded Palestinians, who eventually bled to death.

Her statements came after Israeli soldiers shot and seriously injured a Palestinian woman, identified as Ala’ Wahdan, 28, earlier Wednesday, near Qalandia Terminal, north of occupied East Jerusalem, and refused to allow Palestinian medics to even approach her before he bled to death.

Dr. Ashrawi stated that this policy is a serious and a direct violation of all related international and humanitarian laws.

It is with mentioning that Ala’ was shot by the soldiers, who alleged that she carried a knife, and was left bleeding on the ground with any medical treatment before she was later moved to an Israeli hospital where she was immediately pronounced dead.

In her statement representing the Executive Committee of the PLO, Dr. Ashrawi said that the ongoing executions by Israeli soldiers on military roadblocks have claimed that lives of 65 Palestinians, including 26 children and eight women, since the year 2015.

“This type of brutal behavior reflects the criminal mentality, and the culture of hatred that encourages such cold-blooded executions and extrajudicial assassinations,” Dr. Ashrawi said, “These acts are organized terrorist activities committed by the Israeli army, and reflect Israel’s ongoing disregard of human life, and all related international laws, with the direct and unlimited support American support that also grants it immunity, which encourages Israel not only to continue but also to escalate its crimes and violations.”

She also denounced the international silence and idleness while Israel escalated its violations with impunity.