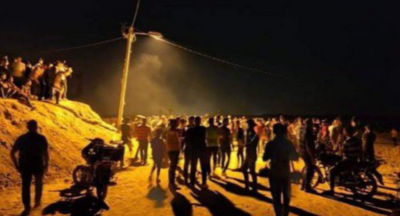 Palestinian medical sources have reported that five residents were injured, on Saturday at night, by live rounds fired by Israeli soldiers, stationed in a military base across the perimeter fence, east of Gaza city. The incidents took place while the army also fired several missiles into various parts of the coastal region.

The Palestinians were injured when the Israeli army fired it rounds at many homes, and into farmlands in the besieged coastal region, and were rushed to local medical centers.

In addition, an Israeli drone fired missiles into a site and farmlands, east of the al-Boreij refugee camp, in central Gaza, causing excessive damage.

The army also fired at least one missile into a building, west of Beit Lahia, in northern Gaza, causing property damage.

Some of the targeted sites are run by armed resistance groups near Beit Lahia, Palestinian sources said.

Meanwhile, Israeli sources claimed that Palestinian shells, which were allegedly fired from Gaza, caused five injuries in Sderot, near Gaza, after a shell landed near a home.

The Israeli army said its soldiers observed two shells fired from Gaza, before one of them landed near a home, causing damage and the injuries.

On its part, armed resistance groups in Gaza said they fired shells in retaliation to continued Israeli bombardment, and the injury of two young Palestinian men, who were shot earlier Saturday, while working on their lands, near the perimeter fence in eastern Gaza.

As Israeli forces bombed Gaza for the seventh evening straight, Palestinian youth gathered near the border fence east of Gaza City for a protest.

According to Quds Press in Gaza, the youth brought with them two truckloads of tires, which they unloaded and then set on fire. The burning tires create a lot of black smoke, which the protesters say they hope will obscure the views of the Israeli snipers stationed on the border.

The youth call their protests ‘night confusion’, meant to confuse the Israeli soldiers who habitually fire directly into crowds of unarmed demonstrators at the border.

The youth focused their protest on the border security fence, which contains a number of Israeli military establishments and guards Israeli settlements constructed on stolen Palestinian land.

The border fence also signifies the imprisonment of the Strip for 13 years by Israeli military occupation forces who have kept the Palestinian population under siege by air, sea and land.

The “Quds Press” correspondent in Gaza said that hundreds of Palestinian youth went to the border fence east of Gaza City near Malaka camp.

Israeli forces stationed at the border fired indiscriminately into the crowd, wounding five with live ammunition.