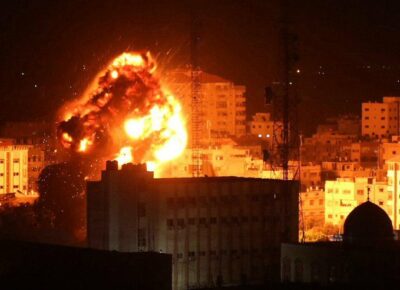 On Saturday night, Israeli warplanes launched a number of missiles at Palestinian civilian areas in the northern, southern and eastern West Bank, according to local sources. The areas hit include Khan Younis, in the southern West Bank, Beit Lahia, in the north, and al-Boreij refugee camp, in eastern Gaza.

Dozens of injuries have been reported, according to Dr. Basem Naim, who tweeted this video:

Saturday’s bombings marked the seventh straight night of Israeli airstrikes in Gaza. Israel claimed it launched the massive missiles into the Palestinian civilian areas in response to what it called ‘incendiary balloons’ from Gaza, which are children’s party balloons with a string attached, bearing a flaming rag or paper that someone in Gaza sent floating upward.

This Video by: Muhammad Najjar/Quds News Network shows one of the bombings, in the northern Gaza Strip.

The Israeli military claimed that the airstrikes targeted “Hamas targets”, although it was unclear what that meant.