Statement by the Embassy of the State of Palestine to Greece Regarding the Tripartite Joint Declaration between the United States, Israel, and the UAE 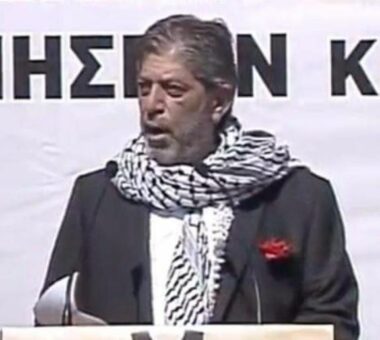 We were surprised, along with many in this world, about the joint American-Emirati-Israeli declaration, which stipulated that Abu Dhabi and Tel Aviv reach an agreement to normalize relations between them under the auspices of US President Trump and his administration.

This agreement is a major and a complete denial of the national and inalienable rights of the Palestinian people and the official and popular Palestinian and Arab positions, and a complete disavowal of the principles of the Arab Peace Initiative, which the UAE has ratified with all other Arab countries and was adopted by the Organization of the Islamic Conference, the United Nations and other regional and international organizations.

This agreement was a flagrant violation of the international consensus represented by the principle of land for peace, the two-state solution, and enabling the Palestinian people to end the brutal Israeli occupation and exercise full sovereignty over their land.

The path to peace is clear, and it never passes through normalization, giving free gifts and extending a lifeline to the Israeli government and Prime Minister Netanyahu, who is mired in his political and judicial crises.

The path to peace first passes through the complete end to the Israeli brutal occupation of the occupied Palestinian and Arab territories, the establishment of an independent Palestinian state on the pre 4th of June 67 borders with its capital East Jerusalem, and reaching of a just solution to the Palestinian refugee issue in accordance with international resolutions, foremost of which is resolution 194 and the release of all Palestinian prisoners in the Israeli jails.

This agreement is nothing more than shedding ash in the eyes and an election card in Trump’s pocket and a lifeline for Netanyahu, who affirmed a few minutes after the joint declaration, that he will continue “spreading Israeli sovereignty” over the Palestinian occupied lands.

On the other hand, far and wide know that President Trump is not keen on peace as much as he is keen on the colonial interests of Israel the occupying country, in order to achieve his goals for his re-election for a new term, especially after the major scandal of his administration in dealing with the Corona crisis and the sharp decline in his popularity.

The Emirati-Israeli agreement will not be a step in promoting peace, as the signatories of the joint declaration tried to market it, but rather it is a new nail in the coffin of the just peace, since Israel has not changed its aggressive behavior and colonial mentality since its establishment and has not retreated from its expansionist and dissolving plans nor its oppression practices against the Palestinian people.

Israel has not refined its behavior in order to win relations with the Arabs. On the contrary, we see in this agreement nothing but an Emirati scrambling towards colonial Israel, which is deeply involved in its practices against the Palestinian people, their land and their rights.

This agreement came to consecrate the occupation, legalize the colonial settlements, and support the Israeli apartheid system practiced against the Palestinian people and the continuity of annexation, and in the harmony of an Emirati condemned initiative with the so-called deal of the century, which the countries of the whole world rejected as it does not meet the basic inalienable rights of the Palestinian people and the international law, but rather robs them of what is remaining in violation of the UN resolutions as well.

The Emirati-Israeli agreement legalizes and supports the Israeli Judaization practices in occupied Jerusalem, Jordan Valley, and in Khalil al-Rahman”Hebron” in particular, and in the whole Palestinian territory in general, as well as the crimes of the Israeli settlers supported by the occupation forces.

We reaffirm that whoever wants to establish relations with Israel contrary to the Arab people and official political consensus, and contrary to the positions of the Arab League and contrary to the terms of reference for peace and the United Nations resolutions and international law, he must not go beyond peace principles and the core of the Palestinian cause.

Our Palestinian people have not assigned and will not allow anyone to speak on their behalf . Our address is clear, it is only the known sole legitimate representative recognized by the international community , the Palestine Liberation Organization “PLO” and its Executive Committee Chairman, President of the State of Palestine Mahmoud Abbas.

The Palestinian issue is not merely an issue of Israel’s annexation of large areas of the occupied territories, but rather a national liberation issue, a cause of freedom and independence.

No just peace will be achieved without the complete end to the colonial Israeli occupation through the call of an international peace conference under the auspices of the UN, Quartet, and any other plus countries.

Our Palestinian leadership is consistent with the stances of its people and leading them in this difficult, critical and delicate phase, with the solidarity of all democracy, human rights and peace advocates around the world, who support the Palestinian people and support their just struggle.

Our Palestinian people who stands on the right side of history are able to keep the Palestinian cause alive and present in the human conscience and in all relevant international forums and are able through the legitimate struggle to achieve and enforce justice and the right of self-determination.

We appeal to all solidarity groups, political parties , associations , trade unions civil society institutions and municipal councils, to remain attached to their supportive position for our Palestinian people until we achieve our full national rights according to international references as the only way to bring peace and security to Palestine and the whole region and its people on bases of international law and UN charter and resolutions.

*Glory and eternity to freedom martyrs.
*Freedom for the brave political prisoners and healing for our wounded heroes.
*Long live the international solidarity with Palestine.
*Long live the Greek Palestinian brotherly friendship