At the U.N., Trudeau Opposes an Investigation into Israel’s Shooting of Unarmed Civilians – including a Canadian Doctor 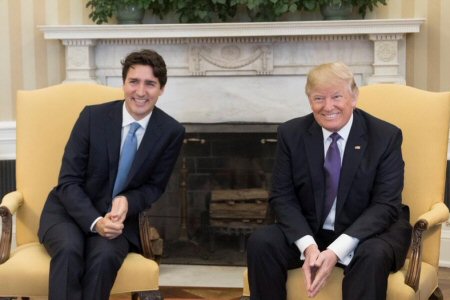 This week, courtesy of Justin Trudeau, the world witnessed one of the swiftest and most cowardly flip-flops in Canadian political history.

On May 16, 2018, Canada’s Prime Minister issued a statement calling for an “immediate independent investigation” into the “tragic” killing and wounding of “countless” protesters in Gaza. Trudeau professed in his statement to be “appalled that Dr. Tarek Loubani, a Canadian citizen, is among the wounded – along with so many unarmed people, including civilians, members of the media, first responders, and children.”

A mere two days later, in a debate at the United Nations Human Rights Council (UNHRC), Trudeau’s government opposed just such an investigation. Ultimately, the UNHRC voted by a margin of 29-2, with 14 abstentions, to establish a Commission of Inquiry into the Gaza massacres.

Given Trudeau’s history of shameless pandering to the pro-occupation lobby, his May 16 statement inspired little confidence that he would in fact insist upon a truly independent investigation into the Gaza massacres and the IDF’s shooting of Dr. Loubani. That is why, on May 17, I tweeted:

The explanation given for Trudeau’s immediate and craven self-reversal, which you can watch and listen to here, is that the UNHRC resolution calling for the investigation “prejudges the outcome of such an investigation,” is “one-sided and does not advance the prospects for a peaceful, negotiated settlement” between Israelis and Palestinians, and “singles out Israel without reference to other actors.”

Let’s unpack that, shall we?

Claim #1: The UNHRC resolution “prejudges the outcome of such an investigation”

It is certainly true that the UNHRC’s resolution, which can be seen here, accuses Israel of violating international humanitarian law, but so too does Canada’s own government. Canada’s Global Affairs website states:

As far as the recent killings in Gaza are concerned, Trudeau himself stated on May 16 that he was “appalled” by the shooting of Dr. Loubani and of “so many unarmed people, including civilians, members of the media, first responder and children.”

The whole world knows that it is the Israeli military that is shooting those unarmed protesters, and is doing so deliberately. In a now-deleted tweet, the Israeli army itself declared on March 31, 2018, the day after it shot 773 Palestinians with live fire, that “we know where every bullet landed.”

Under the circumstances, the fact that the UNHRC resolution accuses Israel of violating international law is no justification for opposing the UNHRC investigation. On the contrary, the UNHRC has ample reason – as does Canada’s own government – to level such accusations. The UNHRC investigation will help to ascertain the extent and nature of those violations, and precisely which military and governmental officials are responsible for them.

The mandate of the UNHRC’s Commission of Inquiry is:

to investigate all violations of international humanitarian law and international human rights law in the Occupied Palestinian Territory, including East Jerusalem, particularly in the occupied Gaza Strip, in the context of the military assaults on the large-scale civilian protests that began on 30 March 2018, whether before, during or after, to establish the facts and circumstances, with assistance from relevant experts and special procedure mandate holders, of the alleged violations and abuses, including those that may amount to war crimes, to identify those responsible, to make recommendations, in particular on accountability measures, all with a view to avoiding and ending impunity and ensuring legal accountability, including individual criminal and command responsibility, for such violations, and on protecting civilians against any further assaults, and to present an oral update to the Council at its thirty-ninth session and a final, written report at its fortieth session.

It is simply unfathomable that any government truly committed to human rights would object to this mandate.

Claim #2: The UNHRC Resolution is “one-sided”

If the UNHRC Resolution appears to focus on Israel’s misconduct, that is simply because it is Israel’s military that is doing all of the killing and the Palestinians who are doing all of the dying. To date, not a single Israeli soldier has been killed, and only one has been lightly wounded.

By contrast, according to the human rights organization Al Haq, approximately 111 Palestinians have been killed, including 12 children, two journalists, and four persons with disabilities. During the same period, approximately 7,000 Palestinian were injured, including 1,244 children, 253 women, 42 paramedics, and 60 journalists – at least 3,615 of whom were hit by live fire.

One could hardly imagine more ‘one-sided’ casualty figures than this. If indeed the UNHRC resolution is ‘one-sided’, that resolution simply reflects the terrible reality of what is happening on the ground.

Claim #3: The UNHRC Resolution “does not advance the prospects for a peaceful, negotiated settlement”

This is, without doubt, the Trudeau government’s most pathetic rationale for opposing the UNHRC investigation.

The obvious point of the UNHRC investigation is to ensure that those who are responsible for these atrocities are held accountable. Without accountability, Israel will continue to violate international humanitarian law with impunity.

Are we seriously to believe that the perpetuation of Israel’s impunity will ‘advance the prospects for a peaceful, negotiated settlement’?

The answer to this question is obvious. So too is the Trudeau government’s double standard.

In the case of 19 other human rights violators, the Trudeau government has gone well beyond mere investigation by imposing economic sanctions. Meanwhile, it lavishes support on Israel – a state whose human rights violations the Canadian government has acknowledged for decades – by voting against broadly-supported UN resolutions critical of Israel’s human rights abuses, supporting more trade between Canada and Israel, allowing products from Israel’s illegal, West Bank settlements to be labelled as ‘product of Israel’ in Canadian stores, permitting the sale of Canadian-made weapons to Israel, and according charitable status to the Jewish National Fund, an organization that is deeply complicit in the violation of Palestinian human rights. The Canadian government even permits Canadians to serve in Israel’s lawless military forces.

In effect, Canada’s government has rewarded Israel for trampling the rights of the Palestinian people, who have lived under a brutal military occupation for over 50 years.

Has this ‘advanced the prospects for a peaceful, negotiated settlement’?

Claim #4: The UNHRC Resolution “singles out Israel without reference to other actors”

The Trudeau government’s statement of opposition at the UNHRC did not identify who the “other actors” are, but undoubtedly, at least one of them is Hamas, which Canada’s government designates a terrorist organization.

Whatever its offences may be, however, there is simply no evidence that Hamas fighters have killed or wounded any protesters or Israeli soldiers during the Great March of Return. Why then, should the UNHRC’s investigation focus on Hamas?

Israel’s apologists claim that Hamas has organized the protests. This is vigorously disputed by observers on the ground: they say that the protests have been organized by Palestinian civil society. Renowned Israeli journalist Gideon Levy maintains that these unarmed protesters are approaching the fence in Gaza not because Hamas brought them there, but because, after years of an inhuman blockade and eight massacres by Israeli forces, a profound sense of despair has befallen Gaza, and all that remains to its trapped and tormented inhabitants, half of whom are children, is to peacefully express their dissent, even if expressing their dissent poses great risk to themselves.

Let us assume, however, that Hamas organized these peaceful protests. Shouldn’t we welcome this development? Is it not a sign that Hamas may have understood, finally, that peaceful resistance is the right and only path to freedom?

The real reason for Justin Trudeau’s opposition to the UNHRC investigation is not that it is one-sided, undermines peace, or fails to focus on the true perpetrators of these atrocities. No, the real reason is that Justin Trudeau came under a withering assault from Canada’s pro-occupation lobby the moment that he waded into the waters of justice.

After briefly exhibiting a modicum of moral courage, Trudeau has swiftly retreated into his comfortable bunker of lies, hypocrisy and callous indifference to Palestinian suffering.

To borrow his own term, Canadians should be “appalled”.