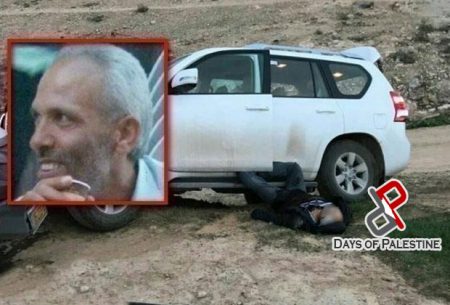 The footage shows that Abu al-Qee’an, who ran over an Israeli policeman during a protest against home demolitions in Umm al-Hiran, speeding towards the group of officers only after they opened fire at him.

According to Days of Palestine, Israeli occupation police accused Abu al-Qee’an of intending to carry out a terror attack against them, but this video gives further credit to the premise he did not intend to do so.

The video, broadcast on Channel 10, Saturday, shows Abu al-Qee’an slowly approaching the officers with his vehicle and the officers then opening fire on him.

An autopsy performed on Abu al-Qee’an, at the Institute of Forensic Medicine, found that he had suffered a bullet wound in his knee, causing him to step on the gas pedal. According to some assessments, this bullet to the leg may have been what caused him to accelerate.

The autopsy report further revealed that a gunshot to al-Qee’an’s chest caused a massive hemmorage which lasted for 20 to 30 minutes.

By the time Israeli paramedics were permitted to provide him with treatment, all they could do was declare the man dead. It is possible that he would have survived, had medical teams been permitted to treat him sooner.