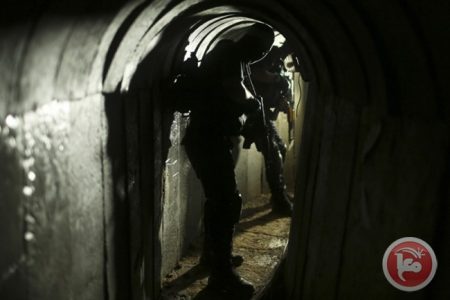 At least two Palestinians have been killed in tunnels under the besieged Gaza Strip, sources said on Monday.

The Izz al-Din al-Qassam Brigades, the armed wing of the Hamas movement, said that one of its fighters, 22-year-old Ahmad Asaad Shihada al-Barim from the town of Khan Yunis, was killed when a “resistance tunnel” collapsed.

While al-Qassam did not specify where the tunnel was located, the use of the term “resistance tunnel” generally indicates tunnels between Gaza and Israel.

Separately, the Palestinian Information Center (PIC) site said on Monday, according to Ma’an, that a worker had been killed when Egyptian forces flooded a smuggling tunnel between the North African country and the blockaded Palestinian enclave.

A number of Palestinians in Gaza have been killed in the vast network of tunnels which lie below the besieged enclave, largely used for smuggling in the south, and military purposes in the north.

In April and May of last year, Israeli forces claimed to have uncovered the first two tunnels crossing from the Gaza Strip into Israel since Israel’s devastating offensive on Gaza in 2014.

Israeli officials have accused Hamas of “preparing” for another war with Israel and have threatened retaliatory measures against the Gaza Strip as a whole. However, despite Hamas’ inflammatory rhetoric against Israel, the movement has not officially claimed responsibility for any military action from Gaza against Israel since the 2014 war.

While the tunnels are used by Hamas as a source of tax revenue and inflow of weapons from the south, they also supply highly demanded necessities for Gazans — who have been trapped under Israeli siege for a decade — including food, medicine, and much-needed infrastructure materials.

Until the July 2013 ouster of Egyptian president Muhammad Morsi, tunnels connecting the Gaza Strip to Egypt provided a vital lifeline for the small Palestinian territory.

Since Egyptian President Abd al-Fattah al-Sisi came to power, however, Egypt has strictly enforced the blockade and flooded hundreds of the tunnels as part of an ongoing security campaign in the northern Sinai Peninsula against anti-regime militants launching attacks on Egyptian police and military personnel.

The Institute for Palestine Studies reported in 2012 that Hamas authorities had counted 160 deaths inside the tunnels since the Israeli blockade began in 2007, and in August 2014, Al-Jazeera reported that figure to be as high as 400.

The majority of the nearly two million Palestinians in the Gaza Strip are sealed inside the coastal enclave due to the continuation of the military blockade imposed by Israel and upheld by Egypt on the southern border.

The destruction from three Israeli offensives over the past six years, including damage to the enclave’s water, sanitation, energy, and medical facilities, coupled with slow reconstruction, due to the blockade, led the UN in September to warn that Gaza could be “uninhabitable” by 2020.