Bahrain Was A Workshop Of Betrayal 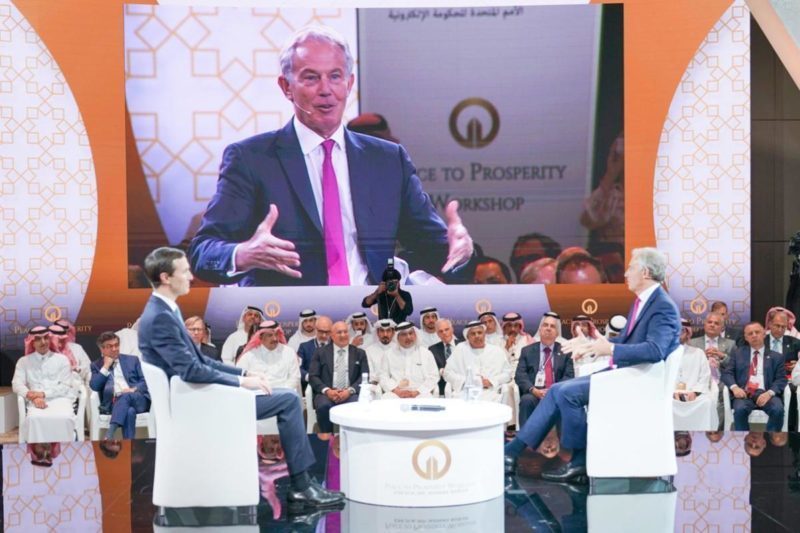 During the rule of the Ottoman Sultan Abdul Hamid, Theodor Herzl made an offer to buy Palestine in order to move the Jews of the world there, but the Sultan rejected the offer. Last week, Herzl’s ideological grandson, Jared Kushner, went to Bahrain to ask the Arabs to sell Palestine in order to move the Palestinians to Jordan, Sinai, Lebanon, Syria and the rest of the world. The Arabs accepted the offer previously rejected by the Ottomans and agreed to sell it cheaply, for just $50 billion. This is the price of conceding Palestine, which is a tenth of what Donald Trump obtained during just one visit to Saudi Arabia. This is the price of our martyrs and dignity in the eyes of the Arab gentlemen who went to Bahrain and rushed to normalise relations with the Israeli enemy. They sat as obedient slaves, listening as their master, Kushner, gave them a lecture.

The Bahrain workshop was basically a market to sell land, dignity and pride for a few dirhams. The corruption and shame reached the highest level when the Bahraini Foreign Minister said that the Palestinians did not have the right to reject the deal, and that he and his kind would pressure them to accept it.

The purpose of the cursed “deal of the century” is to end the conflict between the Arabs and Israel, without resolving it and reaching a just settlement. In order to do so, normalisation must occur between the Arabs and Israel by means of bribes presented in the form of investments and economic deals in the occupied Palestinian territories that would improve the poor economic conditions of the Palestinians both in the West Bank and Gaza, who are suffering from extreme hardship imposed by the Israeli enemy. They are replacing the political side of the Palestinian cause with the economic side, exchanging cash and economic development for the politics; that’s the main goal of the US plan. They think that this money, which will certainly be from the Gulf, will blind the Palestinians and make them forget the central issue and national project to establish their independent state. They will also tempt the countries hosting Palestinian refugees to settle them permanently, thus cancelling the legitimate right of return. We must keep in mind Trump’s decision last year to cut all funding to UNRWA and his request to other countries to do the same; the agency provides essential services to Palestinian refugees in their miserable camps, including food, healthcare and education.

In order to know why Trump cut funding to UNRWA, we must understand the importance of this agency and its role. It was established in 1949 after the previous year’s Nakba and the expulsion of no less than 800,000 Palestinians from their homes in Palestine. The label “refugee” includes all of the Palestinians who left Palestine in 1948, including their children and grandchildren, now totalling 5.4 million people according to UNRWA statistics. The US administration regards this as one of the major obstacles to peace between the Palestinians and Israel.

Cutting aid was the first step towards ending the refugee issue, which is the most complicated one on the negotiating table, and thus at a stroke eliminate the “right of return”. Kushner is Trump’s Zionist son-in-law and advisor; he is tasked with closing down UNRWA and stripping the Palestinians in the West Bank and Gaza Strip of refugee status so that the Americans can say that there are only 500,000 refugees instead of 5.4 million. This is where the idea of resettling Palestinian refugees in neighbouring Arab countries, such as Egypt, Jordan and Iraq, originated, although it is actually an old idea from the 1950s which was completely rejected by the Arab governments in order to preserve Palestinian identity. As such, they did not grant the Palestinians citizenship of the countries in which they sought refuge; they are guests in the host countries, keeping the right of return valid. The Arab League made this decision when it was still a serious body.

We cannot separate any of this from the Nation State Law passed by Israel last year, with which it exposed its ugly racism. This law makes Palestine a land solely for the Jewish people and Hebrew the only official language in the country. The law also makes the Arabs an official minority and imposes on Palestinians the inevitability of accepting either to leave the state or agree to be second class citizens who do not have the right to demand equal rights. This further establishes the major lies promoted by the Zionists for a century that Palestine is the land of the Jewish people only; that it is the Promised Land granted to them by God; that the Palestinian presence in the country is an occupation; and that the war in 1948 was a war to liberate the land from the Palestinian “occupiers”. The Zionists also claim that the land on which they are building settlements in Jerusalem and the West Bank is not “occupied”, but simply part of the expansion of the Jewish homeland. That is why the Nation State Law says that, “The state views the development of Jewish settlement as a national value and will act to encourage and promote its establishment and consolidation” and that immigration leading to immediate citizenship is granted only to the Jewish people in an effort to end the right of return issue permanently.

The only goal behind the Bahrain workshop remains to perpetuate the Zionist occupation in the Palestinian territories and the loss of Palestinian rights, which no Palestinian or free-minded Arab will accept. There is no way that the Palestinians would choose the economy over their national project and right to establish an independent state. In fact, the political aspect of any peace deal should come before the economic part, and from that should emerge the investments and economic projects for Palestinian citizens. This is what the US does not understand. It believes that the Palestinians will rejoice at economic incentives as an alternative to an independent state that they have for so long demanded as a condition for any sustainable peace negotiations with the Israelis.

The Bahrain workshop of betrayal became a quagmire of shame and disgrace from which it will never emerge, as were all of the shameful conferences that were held before it to normalise relations with the Israeli enemy. They are all destined for the dustbin of history; Trump’s “deal of the century” will not pass unchallenged. The Arab nation still has a pulse and it refuses to concede historic Palestine as long as the resistance in Gaza bares its teeth and does not bargain or concede the land. Peace will not be achieved without the Palestinians receiving all of their rights and establishing a free and independent state.