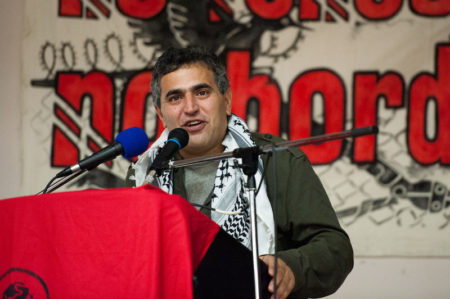 Khaled Barakat, the Palestinian writer who has been subjected to a political ban in Germany for his support of the Palestinian liberation movement, spoke out about the repression of Palestinian activism in Germany in an interview with the “Scope” program on Indus News on 4 July 2019. The program is hosted in Lahore, Pakistan, by journalist Waqar Rizvi.

Other guests on the program included scholar Neve Gordon and Irish parliamentarian Niall Collins. When the ban was issued, Barakat was threatened with up to a year in prison if he spoke at events, demonstrations or lectures. Barakat and Charlotte Kates, the International Coordinator of Samidoun Palestinian Prisoner Solidarity Network, were told their residency would not be renewed in Germany as well. The repression in Germany also comes as part of a state-sponsored international, multi-million-dollar effort by the Israeli Ministry of Strategic Affairs to repress growing solidarity with the Palestinian people and organizing in Palestinian communities around the world, especially in Western, imperialist powers who have aligned themselves with Israeli apartheid and occupation.

Watch the interview below: