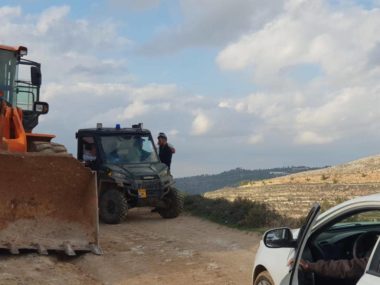 The following is an interview, conducted by Ghassan Bannoura with the Mayor of Battir village about the invasion that took place earlier today.

Q. Please introduce yourself and tell us what happened in the lands between Al-Makhrour area and Battir? (In Bethlehem governorate in the West Bank) And who are the owners of the land?

A. My name is Taysir َQattoush, the Mayor of Battir. In the morning, we were sitting in the City Council, and we received information that the there were settlers with bulldozers and machinery, and there also soldiers, in the al-Makhrour area.

They were coming into the eastern area of Battir, Between our village and Beit Jala. And in addition to the military vehicles, they brought a steamroller for leveling the land in preparation to build a road.

We contacted our friends at ‘Combatants for Peace’ (a joint Israeli-Palestinian peace group), the District Coordination Office of the Israeli military, and the St. Yves Catholic human rights organization.

Then we headed to the area where the bulldozers and machines were working.

And when we went there, there were people from the [Israeli] Civil Administration office, who said they were there to “settle the issue” between the Israeli settlers and the locals.

They said that the settlers were the ones who had brought in that machinery to construct the road on the land of Battir village.

The Civil Administration asked the settlers to remove the bulldozers, and eventually they left – but the work was already completed for this new road they are trying to construct.

We know from past experience that they may now be planning to bring mobile homes across the newly flattened road.

Owners of the land in question are from the Moammar, Oweina, Abu Ni’ma and Rashid families in the Battir area. There are many members of these families who own property in this area.

The area in question is an agricultural area which is frequently targeted by Israeli settlers.

All of that area is agricultural land – and the farmers have been trying to tend these lands, even despite the attacks and difficulties in reaching their land consistently enough to be able to farm them.

The lands are all farmlands, we always try to tend to them, and take care of the lands in that area, but it is very difficult for us to reach the lands, and whenever we try to pave a road, the army prevents us from doing so, and deny us the right to make use of our lands in that area.

Q. Can you tell us how many Dunams of land are threatened by this invasion and excavation for colonialist activities?

A. If we look at the area of there they leveled the land to the edge of the mountain, we are talking about at least 1000 Dunams.

Q. So, the lands are all owned by Battir residents and Beit Jala?

A. Yes, well known families; suck as Moammar, Oweina, Qattoush, and others.

Q. What is your message as the Mayor following this attack?

A. Our message is, of course, a message of peace. We want to stay on our lands.

And we have to now maintain a constant presence in that area – and we’ve called on the owners of the lands to be vigilant as they tend to their land.

We ask for our brothers in the Governorate, and several others areas, to stand by us as we confront the latest colonial activities which are increasing in the area, so that we can remain steadfast on our lands.

— Thank You very much