Israeli Soldiers Abduct Four Palestinians in Ramallah, One In Jerusalem 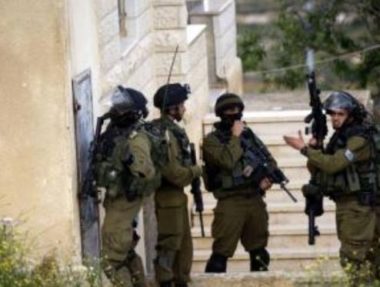 Israeli soldiers abducted, on Thursday at dawn, four Palestinians from Kobar village and Ramallah city, in central West Bank, in addition to one woman from Hizma, north of occupied Jerusalem.

Media sources in Ramallah said dozens of soldiers invaded Kobar village, north of the city, and conducted extensive and violent searches of homes, causing property damage, and interrogated many Palestinians.

The soldiers also invaded and ransacked the home of political prisoner, Omar Barghouthi, a political leader of Hamas, and the father of Saleh Barghouthi, 29, who was killed by the army on December 12th. During the invasion, the soldiers interrogated Saleh’s mother for several hours.

In addition, the soldiers invaded Ramallah city, and abducted Mohammad Asfour, from his home, after invading and searching it.

In related news, the soldiers invaded a home in Hizma town, northeast of Jerusalem, and abducted Kifah Salahuddin, the mother of a political prisoner, identified as Mohammad Salahuddin.