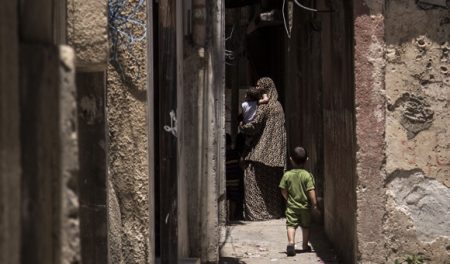 A mother carrying an infant walks with her son through a narrow alley in Balata refugee camp, near the West Bank city of Nablus. (Photo: DCIP / Cody O’Rourke)

Gun violence between armed camp residents, during the day, and raids by both Palestinian and Israeli forces, at night, have become commonplace in Balata, a crowded and impoverished refugee camp outside of Nablus in the northern West Bank.

“Chaos and lawlessness have spread inside the camp,” said Firas H., a 28-year old father, raising two children in Balata. “Unidentified gunmen open fire in the air without being stopped by the security forces.”

In recent years, conditions have significantly deteriorated, Firas told Defense for Children International – Palestine, and his children have noticed. “They are worried and scared that they might get shot by a stray bullet,” said Firas.

The sound of gunfire can regularly be heard throughout the camp to celebrate occasions like a prisoner’s release, or during family conflicts. Unregulated and “random” gunshots have rattled many of Balata’s residents, who live in densely packed buildings, in close proximity to their neighbors.

High instability has only increased the number of camp residents bearing arms, as Firas observed. “People carry weapons or at least knives, and this is a constant danger.”

Gunfire often continues into the night and early morning as Israeli and Palestinian forces routinely raid the camp, seeking out wanted suspects and illegal weapons caches.

Last November, Khalil Q., 10, awoke to the all-too-familiar sound of gunshots outside the cramped four-storey building where his family of seven lives.

His mother told him that Palestinian security forces were once again raiding the camp and exchanging heavy gunfire with armed camp residents.

A little after 8:30 a.m., Palestinian security forces fired tear gas canisters into the ajacent alley and onto the building’s roof, according to his testimony. Khalil said his family and the other 26 people who lived in the building began evacuating into the street.“I was terrified because we could die choking or getting shot at,” Khalil said.

While exiting, he saw his grandmother carrying a baby, only two months old, as she foamed at the mouth from tear gas inhalation. Instead of allowing them to pass safely, Khalil said a Palestinian security forces member, about 10 feet away, threw a smoke grenade at them.

“The grenade landed one meter [3 feet] from us and released white and orange smoke. It exploded in front of us,” Khalil said. “Women and children were screaming, ‘We’re dead, we’re dead!’”

Palestinian security forces raids have become more frequent since the Palestinian Authority (PA) began a “massive security crackdown” in August 2016, according to local media. Since then, the PA has increasingly targeted Balata, as a “hot spot” for the proliferation of illegal weapons with aggressive policing tactics. 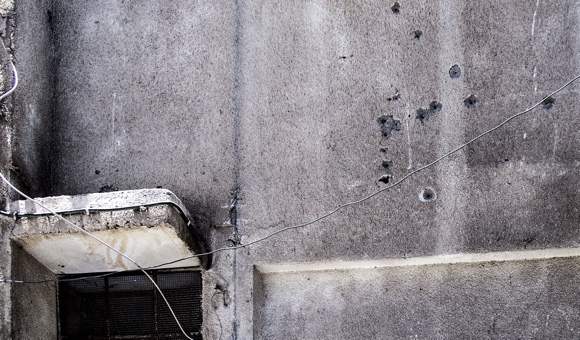 Bullet holes can be seen on the external wall on the second floor of an apartment building in Balata refugee camp. (Photo: DCIP / Cody O’Rourke)

“It is an atmosphere of permanent anxiety,” said Raed Sanaqra, a school counselor to 750 students at Balata Boys Secondary school.

He told DCIP that high exposure to violence from multiple sources is marring every aspect of his students’ development. The school is sometimes forced to dismiss children early and he has noticed grades sliding. Even children’s social relations are showing signs of strain.

“Witnessing shooting incidents has led children to exhibit aggressive behaviors among themselves,” said Sanaqra. “They fight a lot and leave school whenever they hear any sound of gunfire. This is the reality we are living here in the camp.”

Established in 1950 by the United National Relief and Works Agency for Palestinian Refugees in the Near East (UNRWA) in response to the 1948 refugee crisis that saw at least 750,000 Palestinians forcibly displaced, Balata was never intended as a long-term solution. Most of Balata’s residents are refugees from approximately 60 villages and cities in and around the southern coastal city of Jaffa during events that Palestinians call “al-Nakba,” or “the catastrophe.”

Originally designed to provide temporary shelter for 5,000 people, this tiny camp is now home to 27,000, making it the largest refugee camp by population in the West Bank. Approximately 40 percent of the camp’s residents are children under 15 years of age, UNRWA reports.

However, Balata’s physical space has not increased in proportion to its population growth. Since its inception on 0.1 square miles, the camp has only expanded by 0.0004 square miles. While a few registered refugees have moved out of the camp, unemployment and poverty have forced most to stay inside the camp, building vertically or into the streets.

As a result, nearly all of the gardens have disappeared and many streets have become alleys too narrow for a car or an ambulance to fit through. Residents report little privacy from their neighbors and there are few public spaces for children to play in.

The ghettoization of Balata refugee camp has created a sense of abandonment among residents, who claim that the PA has abrogated its responsibilities toward them. This claim is not baseless. In 2015, Palestinian security forces spokesperson General al-Dimiri told Middle East Eye that “the problems in Balata camp are UNRWA’s responsibility. The camp is under the jurisdiction of UNRWA; it’s not under the law of the municipality.”

UNWRA, however, maintains that law enforcement falls clearly outside of the organization’s scope. “As a neutral humanitarian organization mandated by the UN General Assembly to provide emergency and human development services, UNRWA does not have a role in law enforcement,” Christopher Gunness, a spokesperson for UNRWA, told DCIP. “Clearly, though, as a UN human development agency we espouse UN values and would advocate against violence and the militarization of the refugee camps.”

Nisreen Bsharat, a psychologist at Yafa Cultural Center, a non-profit educational and cultural organization in Balata refugee camp, has been working to counteract the impact of Balata’s challenging environment on children.

Referring to Maslow’s hierarchy of needs, she explained that children cannot reach their full potential if lower-order needs, like food and safety, are not met. “People look for safety and security not as luxuries or formalities, but as needs that life is not complete without,” said Bsharat. “But fulfilling these requires stability, which is something rare in the camp.”