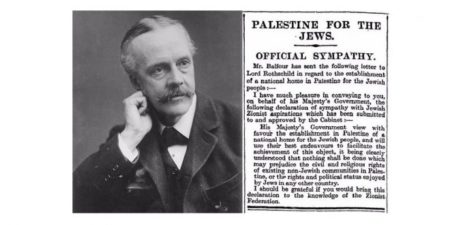 Marking the 102nd Anniversary of the Balfour Declaration on Saturday, Senior Palestinian Official, Dr. Saeb Erekat said Britain has the responsibility to make a qualitative shift towards realizing the political rights of the people of Palestine and recognizing their State.

Erekat, in an official statement, said that this date should serve as a reminder, for the United Kingdom, of its historical, political, moral, and legal responsibility to take substantive action and play a proactive role in the fulfillment of the national rights of the people of Palestine…

“…to apologize for the resulting injustice of a colonialist statement that denied the Palestinian people their political rights, to recognize the State of Palestine, and to take proactive measures against Israel’s colonial-settlement enterprise, including its products, companies, and funding sources,” Erekat said.

“Such actions are not going to remediate all the consequences of the Balfour Declaration. Yet, they will serve as a model for the rest of the international community to work for a just and lasting peace in Palestine, the Middle East, and the world,” he added.

According to the PNN, Erekat also added that what is happening on the ground today, in occupied Palestine, cannot be disconnected from the Balfour Declaration.

“Israel’s colonial agenda, supported by the Trump Administration, is precisely what Balfour envisioned 102 years ago: an overall Israeli control over the land of historic Palestine that can systematically deny the political rights of the Palestinian people and their right to self-determination,” he added.

The statement also saluted the International Solidarity Movement, civil society organizations, and other popular initiatives working towards the achievement of Palestinian rights, defending the principles and core values of the global system and law, in the face of the reactionary wave of populism.

“Only by implementing international law and UN resolutions, we will be able to face those forces that aim at imposing the law of the jungle, threatening the basic principles of peace, security, and stability,” he concluded.