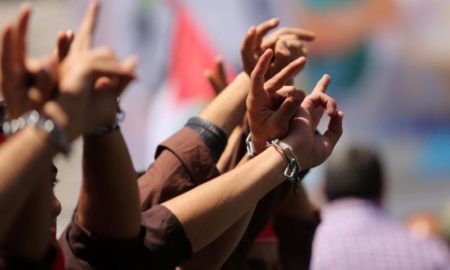 Asra Media Office, on Sunday, stated that four Palestinian detainees, including a female prisoner, are maintaining their open-ended hunger strike in protest of their illegal imprisonment without charge or trial.

The office added that the hunger strikers are identified as:

30-year-old prisoner Ismael Ali, a resident of Abu Dis village, in occupied Jerusalem. He has entered his 103rd day of hunger strike.

29-year-old prisoner Musab al-Hindi, a resident of Tell town, southwest of Nablus. He has entered his 41st day of hunger strike, and has been moved to al-Ramleh prison clinic.

Al Ray Palestinian Media Agency notes that about 500 Palestinians are currently being held under Israel’s illegal and outdated policy of administrative detention, under which prisoners can be held for renewable six-month periods without charge or trial.