BDS: Take the Pledge — Give PUMA the Boot Until It Ends Support for Illegal Israeli Settlements 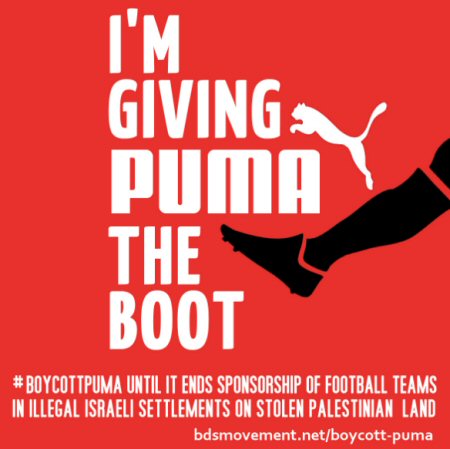 On April 18, Puma shareholders will gather for the company’s Annual General Meeting (AGM).

Let’s make sure Puma’s sponsorship of Israeli war crimes is on the agenda!

Puma is the only international sponsor of the Israel Football Association (IFA), which includes teams in illegal Israeli settlements on occupied Palestinian land.

Puma’s endorsement gives legitimacy to Israel’s illegal settlements pushing Palestinian families off their land and its attacks on Palestinian sports. Israeli snipers ended the careers of dozens of Palestinian athletes in Gaza, in 2018, alone.

Palestinian teams and athletes are calling for a boycott of Puma until it ends its sponsorship of the IFA.

Puma’s own assessment of its human rights track record identified “sponsorship activities” as one of its “weak spots.”

Give Puma the boot! Join social media actions or write to Puma today!

– Write to Puma using the form on the right

Collective action works! Earlier this month, thanks to thousands of you, UNICEF announced it does not support the EuroAsia Interconnector electricity cable plugging Europe into Israel’s illegal settlements. Let’s do this again!

Let’s convince Puma to live up to its claim of supporting equality and social justice!

Palestinian Campaign for the Academic and Cultural Boycott of Israel

PS: Save the Date! International #BoycottPuma Day of Action, June 15, 2019