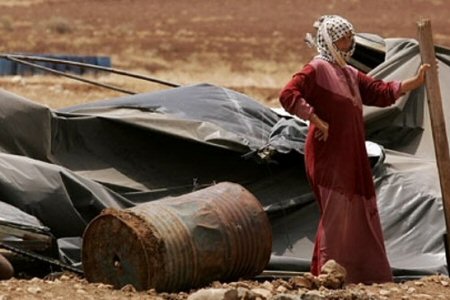 A Palestinian bedouin woman stands next to her destroyed tent in the village of Atouf in the Jordan Valley (AFP, File)

Israeli authorities demolished the Bedouin village of al-Araqib for the 129th time on Thursday, WAFA reported, according to Ma’an.

Thursday’s demolition marked the second time since April that the community has been targeted.

The Israeli demolitions of al-Araqib, located in the south of Israel’s Negev desert, are carried out in attempts to force the Bedouin population to relocate to government-zoned townships. Rights groups say that demolition is a central Israeli policy aimed at removing the indigenous Palestinian population, clearing the way for the expansion of Jewish Israeli communities.

The Association for Civil Rights in Israel (ACRI) believe that over half of the approximately 160,000 Bedouins in the Negev reside in villages not recognized as legal by Israel.

Now more than 60 years later, the villages have yet to be recognized by Israel and live under constant threats of demolition and forcible removal.