US Senator Bernie Sanders Criticizes US Policy Toward Palestine 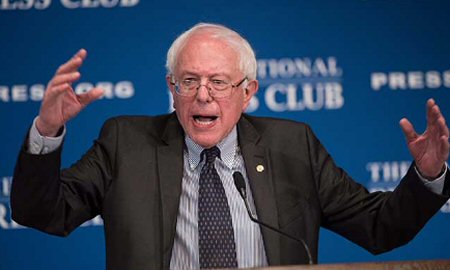 US Senator Bernie Sanders criticized US administration policy in the Middle East, and Palestine in particular, accusing Washington of being partial to the Israeli side.

Sanders, in an open meeting organized by The Washington Post, Wednesday evening, called for finding a solution to the deteriorating humanitarian situation in Gaza, urging Washington to work for that goal.

He said that it is unacceptable that about 2 million Palestinian in Gaza live with dirty water and an unemployment rate, among the youth, that has risen to 60 %, while people can not even leave the region.

According to Al Ray Palestinian Nedia Agency, he also criticized Israeli government policy towards Palestinians, saying that Prime Minister Benjamin Netanyahu has thwarted the aspiration of a two-state solution by building more and more settlements.

He stressed that US administration must recognize Palestinian human rights to freedom and independence.

He explained that US must follow an unbiased policy in the Middle East, and is not doing so, presently.

Bernie Sanders is Jewish and ran for office during the 2016 US presidential election.

Sanders accused US President Donald Trump of constantly lying to the American people: He promised to withdraw from Afghanistan but he did not. He criticized the war in Iraq, but, then, brought in John Bolton as National Security Adviser.

Sanders called for reducing the US defense budget, saying that he voted against increasing the budget, in Congress.