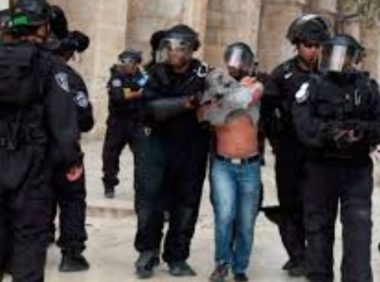 Israeli soldiers abducted, Thursday, a Palestinian child and a young man in the Al-Aqsa Mosque courtyards, in occupied Jerusalem, after dozens of officers and settlers invaded the holy site and conducted provocative tours.

Many worshipers started chanting against the violation, and ongoing occupation, before the soldiers assaulted them, and fired concussion grenades at them, leading to limited confrontations.

The soldiers also abducted a child, and a young man, from the mosque, and took them to an unknown destination.

On Wednesday, the Islamic Committee in Jerusalem issued a statement condemning the escalating Israeli violations, and invasions into the mosque complex, especially during the holy Muslim month of Ramadan.

They added that usually Israel refrains from conducting such tours into the holy site during the last ten days of Ramadan, but it appears that it is now breaking its own rules, and escalating its violations against the holy site.