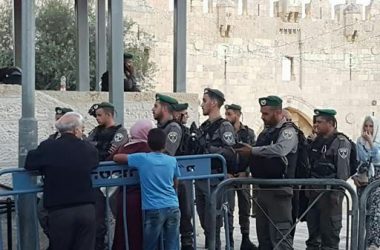 Israeli soldiers abducted, on Wednesday evening, four Palestinian children near the New Gate, of the old city of occupied Jerusalem, and moved them to an interrogation center.

Khaldoun Najm, a lawyer with Wadi Hilweh Information Center in Silwan (Silwanic) said the soldiers assaulted and injured the four children, before abducting them.

Najm added that the children were taken prisoner after an Israeli colonialist settler assaulted them near the New Gate.

Israeli officers arrived at the scene, and attacked the children before abducting them, and took them to the Police station in Salaheddin Street, instead of detaining the colonialist settler who assaulted them.

On Thursday, the soldiers abducted a young Palestinian man from the al-‘Isawiya town, in the center of occupied Jerusalem.

The soldiers also welded shut the main door from a Palestinian family’s home to Shuhada Street, in Hebron city, in the southern part of the occupied West Bank.

Earlier Thursday, the soldiers invaded many homes, confiscated gold, a mobile phone and a car, and abducted two Palestinians, in Hebron governorate.