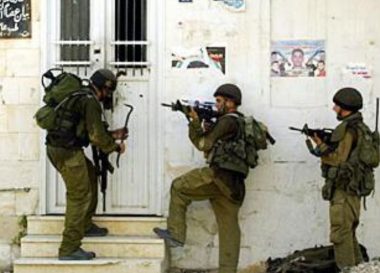 On Thursday, Israeli soldiers welded shut the main door from a Palestinian family’s home to Shuhada Street, in Hebron city, in the southern part of the occupied West Bank.

The street used to be very vital, filled with stores and shops, before Israel shut it down, following the Ibrahimi Mosque Massacre against Palestinian worshipers in the year 1994.

Eyewitnesses said the soldiers stormed the home of Sami Zahda, before welding shut the main door of his home leading to Shuahada Street.

On February 25, 1994, a US-born Israeli military physician, identified as Baruch Goldstein, walked into the Ibrahimi mosque in Hebron armed with a Galil assault rifle.

It was early morning, during the holy month of Ramadan, and hundreds of Palestinians were crammed inside, bowed in prayer.

29 were massacred in the Ibrahimi Mosque in Hebron, the Muslim holy site at the Cave of the Patriarchs. It wasn’t only the 29 people who were killed but also many other people from the locality- people living in the area estimated about 250 people wounded from the incident happened, some suffering permanent disabilities.

Earlier Thursday, the soldiers invaded many homes, confiscated gold, a mobile phone and a car, and abducted two Palestinians, in Hebron governorate.