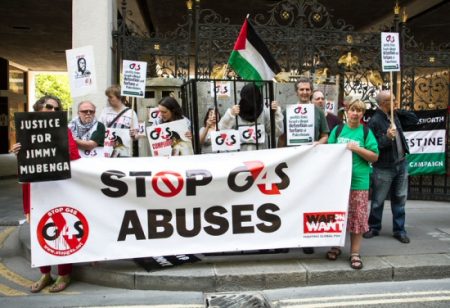 The city of Berkeley, California, has adopted a resolution to divest from private prison firms, including G4S, a provider of services to Israeli jails where Palestinians are routinely tortured.

In the resolution, approved by the city council on 19 July, Berkeley will be called on to divest from private prison corporations and request that its business partners, including banking giant Wells Fargo, follow suit.

The resolution targets major players in the US’ private prison industry, including the Geo Group, the Corrections Corporation of America (CCA) and G4S.

G4S is one of the largest corporations in the world and provides security services inside US prisons.

It also operates inside Israeli prisons, where Palestinian adults and children are routinely interrogated, torturedand held without charge or trial.

The corporation has been a longtime target of the Palestinian-led boycott, divestment and sanctions campaign for its involvement in Israel’s military occupation and incarceration systems.

G4S has lost millions of dollars in contracts with businesses, unions and universities, due to the growing boycott campaign. The United Methodist Church and the Bill and Melinda Gates Foundation have also pulled their investments in the company.

Earlier this year, G4S announced it was leaving the Israeli market and selling its Israeli subsidiary, but the corporation has a long track record of breaking promises.

The resolution was introduced to Berkeley city council in June by members of Enlace, an alliance of low-wage worker centers, unions, and community organizations in Mexico and the US, as well as members of the Afrikan Black Coalition (ABC), which represents Black students in the University of California system.

Friends of Sabeel North America, an ecumenical Palestinian rights group, “encouraged the inclusion of G4S in the list of companies” targeted for divestment because of its dual roles in the US and Israel, according to a press release.

“This is a straightforward process that any town can pursue with a strong coalition of concerned community members,” said Rochelle Gause,the group’s national organizer.