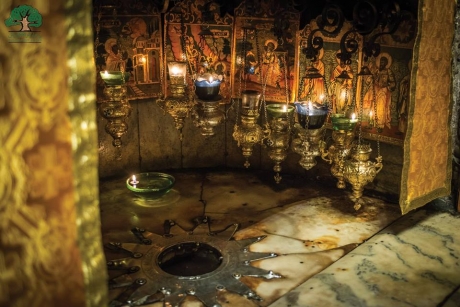 Custos of the Holy Land Father Francesco Patton arrived on Friday, in Bethlehem, in anticipation of Epiphany, which takes place on January 6.

Patton headed the annual procession of Epiphany, which started in the Latin Patriarchate in Jerusalem and made its way to Manger Square in Bethlehem, passing through a massive metal gate in Israel’s separation wall at the northern entrance of the city.

According to WAFA, Patton was greeted by parishioners and clerics, as well as Bethlehem’s Mayor Anton Salman, Ziad al-Bandak, the presidential adviser for Christian National and International Relations, and representatives of various security services, and entered the Basilica of the Nativity through the door of Humility before the recitation of the first vespers, at St. Catherine’s Church.

On Saturday morning, he is anticipated to preside over the Holy Mass, in Arabic and Latin, in St. Catherine Church, which will be packed by parishioners, clerics and religious figures.

The pontifical vespers for Epiphany will come a day before January 7 when the Orthodox and Oriental churches celebrate Christmas, according to the Julian calendar.

The Church of the Nativity is administered by three churches, the Roman Catholic Church, the Greek Orthodox Church and the Armenian Church.