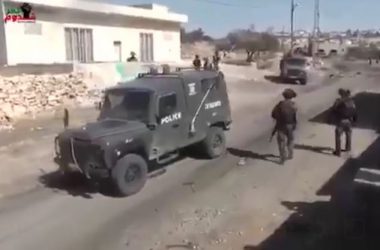 Israeli soldiers attacked, Friday, the weekly procession against the Annexation Wall and Colonies, in Kufur Qaddoum town, east of Qalqilia, in the northern part of the occupied West Bank.

Morad Eshteiwi, the media coordinator of the Popular Committee in Kufur Qaddoum, said the dozens of Palestinians and international peace activists, marched from the center of the village, despite the heavy rain.

Eshteiwi added that the soldiers attacked the protesters with gas bombs and concussion grenades, causing no injuries, and attempted to abduct some of them.

He also stated that “despite the heavy rain, and the strong wing, the protesters insisted on marching to send a message to the world that the Palestinians are determined to continue their struggle until liberation and independence.”

Eshteiwi added “that the Palestinians will continue their legitimate struggle, for occupied Palestine and its capital Jerusalem, despite the Israeli escalation and aggression.”