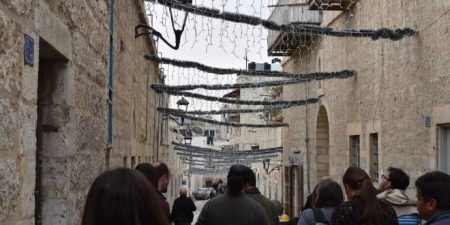 Over 20 people, including Palestinian journalists, researchers  and internationals, on Thursday, took part in a tour in the Old City District of Bethlehem, to learn more about the city’s history and little known facts.

The tour, held by Masar Ibrahim Al-Khalil (MIAK) organization and the Center for Cultural Heritage Preservation (CCHP), began at the entrance of the Old City, and headed towards the alleys in the 160 year old Star Street.

The tour guide, George Al-A’ma, gave detailed information about the history of each lane, house, and the architectural process behind it, starting from the 18 century till the 20th.

According to a 17-year research carried out by Al-A’ma, the U-shaped city has an extraordinary history which the Palestinians built over the years.

In the 1800’s, the basic architecture of the city  was built by the Ottomans who ruled Palestine at the time. The tight alleys and 15-meter high gates of the city however, are reportedly a sign of the Ottoman restrictions and control over the business movement in the area.

The tour also included visiting the home of Bethlehemite novelist and artist, translator and musician Jabra Ibrahim Jabra, who was buried in Iraq.

The golden era of the area was the 19th century, when it was the heart of souvenir shops and thriving tourism and businesses.

The tour also talked about the old Bethlehem homes “Hosh”, which  were U-shaped houses  with windows that open towards the inside for safety.

George Rishmawi, from Masar Ibrahim, said that the tour aims to show that Bethlehem is much more than the Church of Nativity and the nice buildings.

Mais Salsa’ from CCHP also assured that the center carries out projects that aim to preserve the history and culture in Palestine, a treasure that must be cherished, while CCHP continues to sponsor projects that inspire developing the economy, culture, and tourism in the city.

This tour is a chance for discovery for anyone interested in knowing more about each stone in the Old City; a well-known place that witnessed a rise and fall of empires, and is still a lively place for tourism and attractions.

10/16/17 Olive Picking in Palestine: Another Form of Solidarity (VIDEO)