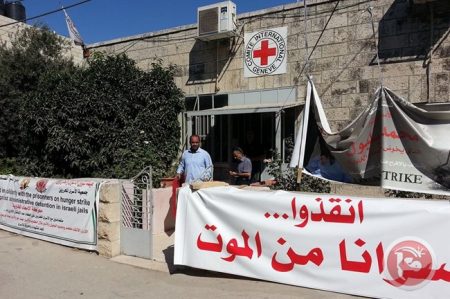 A group of Palestinian youth, activists and politicians staged a sit-in, Saturday, at the Bethlehem office of the International Committee of the Red Cross (ICRC), in the southern occupied West Bank, to show solidarity with hunger-striking Palestinian prisoners in Israeli custody.

Spokesperson for the Bethlehem office of the Palestinian Prisoner’s Society, Abdullah Zighari, told Ma’an News Agency that the offices were closed, but that the protesters managed to access the reception hall, which was left open.

The main goal of the protest, he said, was to send a clear message to the ICRC to urge the organization to take practical steps to try and solve the question of hunger strikers “who are facing imminent death.”

Chairman of a committee that coordinates between local committees against Israeli settlements and the apartheid wall, Munthir Amirah, said Saturday’s protest was meant to send a message not only to the Red Cross, but to all international organizations operating in Palestine.

Those organizations, he said, “have not taken any effective measure to resolve the issue Palestinian prisoners on hunger strike in protest against Israel’s policy of administrative detention” — under which Israel detains Palestinians without charge or trial under undisclosed evidence. “This is a message to all international and Palestinian organizations that the Palestinian people will not remain silent. This case cannot be solved through Facebook, but rather through intensifying field activities in different ways.

Amirah urged average Palestinian citizens to “think seriously” about families who will spend the upcoming Muslim holiday Eid al-Adha without their children who are in Israeli custody.

After a mass movement spread across Israel’s prisons, over recent months, three Palestinians remained on hunger strikes in protest of their administrative detention.

Brothers Mahmoud and Mohammad Balboul both declared hunger strikes on July 4 and 7 respectively, while Malik al-Qadi declared his on July 16.

At the peak of the mass hunger strike, more than a hundred prisoners had declared temporary strikes in solidarity with the dozens who had declared open-ended strikes.

The three hunger strikers are all reportedly near death and in critical condition, as they each have only been consuming water since their strikes began. On Saturday, reports emerged that al-Qadi had fallen into a coma, while Mahmoud Balboul was reported to have been suffering from severe chest pains. Mohammad Balboul has been suffering from temporary blindness for days.

Although Israeli authorities claim that the withholding of evidence during administrative detention is essential for state security concerns, rights groups have instead claimed the policy allows Israeli authorities to hold Palestinians for an indefinite period of time without showing any evidence that could justify their detentions.