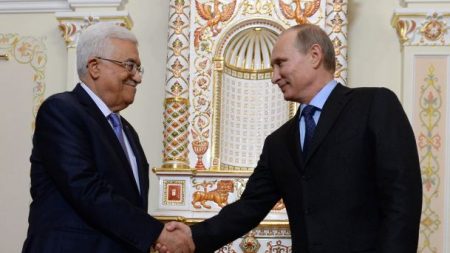 A new complex named after Russian President Vladimir Putin was inaugurated on Thursday, in Bethlehem.

Speaking via video conference from Sochi, in Russia, where he is meeting with Putin, President of the Palestinian Authority Mahmoud Abbas thanked Russia for its continuous support for the Palestinian people.

He said, according to WAFA, that this new building, a gift from Russia to the Palestinian people, is going to contribute to strengthening relations between the two cu;tures in economics, sports and cultural levels.

“As we inaugurate this great place, we are satisfied and proud of the growth of our countries’ relationship on all levels,” said Abbas, stressing that his new place adds to already existing Russian projects in Palestine including the Russian Museum in Jericho and the Russian School and Russian Cooperation Council in Bethlehem.

Putin also said, via video conference, that he was happy to take part in the inauguration of the new multi-purpose complex in Bethlehem, which he said was proof of the close ties between the two people.

He noted that Russia provides 100 scholarships to Palestinian students and said that many of those who studied in Russia or the former Soviet Union have become doctors, teachers and other specialists.

Ziad Bandak, chairman of the board of directors of the new complex named Putin Palestinian Foundation for Culture and Economics,  said the opening of this complex reflects Russia’s support for Palestine at the political, economic, cultural, sports and religious levels.

According to Bandak, the opening of the foundation strengthens the steadfastness of the Palestinian people, and proves that “the support of the sincere friends of our people, on top of which is Russia, is the most important element for building the foundations of the future Palestinian state and ending the Israeli occupation.”

Bandak said he was looking forward to seeing Russian President Putin visit the institution in Bethlehem, explaining that the six floors project includes a sports and youth center, a music complex for teaching and training, a cinema and theater, and an all-purpose hall.

He said that the cost of the project amounted to $40 million, according to Russian sources, stressing that it represents a bridge of cooperation between the two peoples.