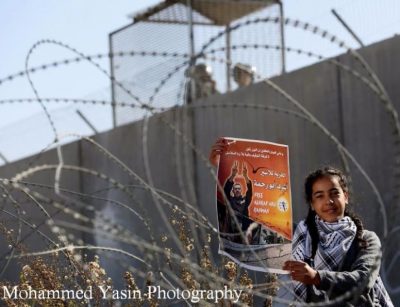 Dozens of Palestinians, accompanied by Israeli and international peace activists, held the weekly nonviolent procession against the illegal Annexation Wall and colonies, in Bil’in village west of the central West Bank city of Ramallah, and demanded the release of detained nonviolent activists.

They marched through the village, carrying Palestinian flags, and chanting for national unity, and ongoing struggle against the Israeli occupation and its colonies, in addition to calling for the release of all political prisoners.

Upon reaching the iron gate of the Annexation Wall, some activists started knocking on it with stones, and wrote graffiti, while the soldiers, station in their military towers, filmed the protesters. 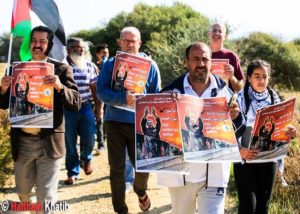 Dr. Rateb Abu Rahma, the media coordinator of the Popular Committee against the Wall and Colonies in Bil’in, strongly denounced the ongoing imprisonment of Abdullah Abu Rahma, especially since the appellate Israeli court ordered his release, but the military never complied, and he was remanded for an additional week pending prosecution or a further decision.

He added that nonviolent activist, Ashraf Abu Rahma, was sentenced to three months imprisonment, and a 5000 Shekels fine. 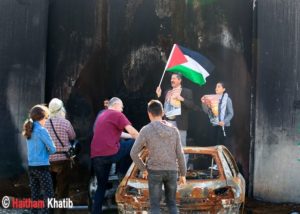 Dr. Abu Rahma added that the Israeli assaults, violations and imprisonment of nonviolent activists, will not deter the Palestinians from continuing their legitimate struggle against this illegal occupation and oppression, and will continue the popular activities and processions against the Annexation Wall and colonies.

The Popular Committee in Bil’in also denounced the murder of Mahmoud Za’al Odeh, 46, who was shot dead by Israeli colonists, who attacked many Palestinian farmers near the northern West Bank, on Thursday afternoon, and wounded another Palestinian.