Bil’in Holds The Weekly Protest Against The Wall, Colonies 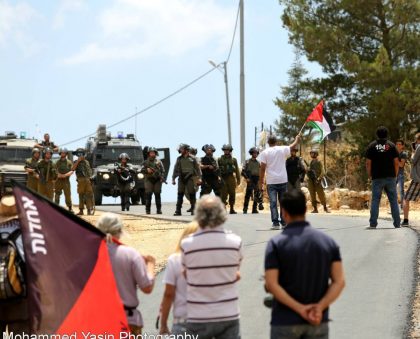 Several Palestinian, Israeli and international peace activists participated, Friday, in the weekly nonviolent protest against the Annexation Wall and colonies, in Bil’in village, near the central West Bank city of Ramallah.

The protesters marched from the center of the village while chanting against the Israeli occupation, the ongoing illegal annexation of Palestinian lands, and the escalating violations.

Dozens of soldiers were deployed the in the area, and blocked a main road, preventing the nonviolent protesters from approaching the isolated Palestinian lands and orchards.

Photojournalist Haitham Khatib said the protest was small this week, with around 25 persons marching, and fifty Israeli soldiers opposing them.

“They are occupiers, and this is our land — fifty combat-ready armed soldiers, and we were around 25 persons.”

He told the IMEMC that the army did not fire on the protesters, and the procession ended peacefully without any reports of injuries.