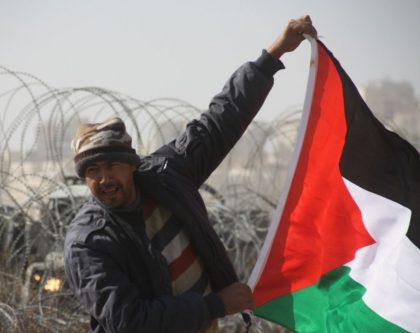 Many Palestinians, accompanied by Israeli and international peace activists, marched Friday against the illegal Israeli Annexation Wall and colonies, in Bil’in village, in the central West Bank city of Ramallah.

The Popular Committee in Bil’in said the nonviolent protestors marched while carrying Palestinian flags, and chanting for national unity, the release of all political prisoners and the liberation of Palestine.

The protesters managed to reach an area close to the gate of the Annexation Wall before the soldiers stopped them, and chased many locals in Palestinian orchards.

The soldiers claimed that the area has been declared a “closed military zone,” an allegation the army frequently uses to prevent the Palestinians from entering certain areas, including their farmlands and orchards.

Dozens of soldiers were deployed in the area, encircling the village, and closed roads leading to the Wall and Palestinian orchards, to prevent the nonviolent protesters from marching.