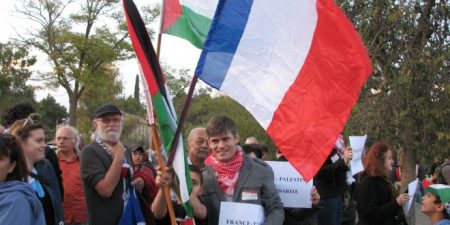 The Israeli government has condemned France’s decision to label settlement products, according to Israeli public radio.

The Foreign Ministry said that, with this decision, France may strengthen measures which could be interpreted as support for “extremist” group positions, including the boycott movement against Israel.

PNN further reports that an Israeli political source asserted that the move comes after France failed in its efforts to hold an international peace conference .

On Thursday, the French government published regulations requiring importers and retailers to label all products originating from settlements in the occupied territories .

According to Israeli newspaper Haaretz, the notification is headed “Notice to economic operators concerning the indication of origin of goods originating in the territories occupied by Israel since June 1967.”

It further states that, in accordance with the November 2015 European Commission guidelines, the West Bank, East Jerusalem and the Golan Heights are occupied territories and not considered part of the State of Israel. Therefore, in order not to deceive consumers, the regulations say it is necessary to mark the precise place from which goods originating in these areas came, and not mark them as products of Israel.

Under the new regulations, if a product comes from a settlement, French retailers and importers must make this clear on the packaging, and not just name the general geographical location from which the product originated.

The regulations make it clear that this is intended to prevent a situation in which consumers are misled and think they are buying Palestinian goods from the occupied West Bank or East Jerusalem.

The regulations also state that the geographical region from where the product originated must be noted – for example, “the West Bank” – and, then, in parenthesis on the packaging, it must be stated when the product comes from “an Israeli settlement.”

The November 2015 European Commission guidelines were concerned with the labeling of fresh fruits and vegetables, wine, honey, olive oil, eggs, poultry, organic products and cosmetics. They are not obligatory with regard to packaged foodstuffs nor with industrial products which are not cosmetics.

The guidelines, published due to pressure by many countries on EU foreign policy chief Federica Mogherini, also stated that the European Union does not recognize Israeli sovereignty beyond the 1967 lines, irrespective of the status of those territories under Israeli law, and is interested in having regulations and legislation in Europe reflect this position.

The European Commission stated that enforcement of the regulations is the responsibility of authorities in each of the 28 EU countries. It is the member countries who will determine what punishments to impose on those who do not carry out the instructions. However, the instructions do obligate the countries to impose sanctions on anyone who violates the regulations, and does not mark settlement products accordingly.

The European Commission retains the possibility of initiating procedures to examine violations if the member countries don’t deal with this themselves.

The publication of the European Commission regulations triggered a major crisis between Israel and the European Union last year, with Israel suspending contacts with the EU on the Palestinian issue for about three months. The crisis ended only this February, following negotiations between the two sides.