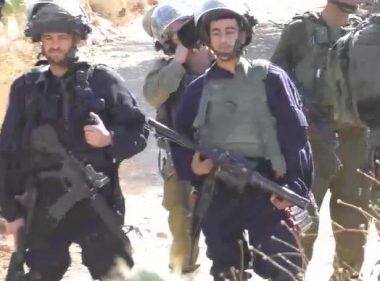 The weekly procession started from the center of the village, heading towards Palestinian lands and orchards, before the soldiers started firing gas bombs and concussion grenades, causing many several protesters to suffer the effects of teargas inhalation.

The attack against the protesters was carried out after they reached the southeastern area of the village, close to their orchards.

Israeli officials, topped by Prime Minister Benjamin Netanyahu, claimed the bill aims at “protecting the citizens of Israel from noise.”

On Sunday, November 13, 2016, the Israeli Knesset’s Ministerial Committee debated the bill, known as the “Muezzin Bill,” and authorized it for a parliamentary vote.

Netanyahu told the weekly cabinet meeting that he fully supports the bill, and alleged that “citizens from all faiths in the country have complained about excessive noise from muezzins,” calling for prayers using megaphones in the mosques’ minarets.