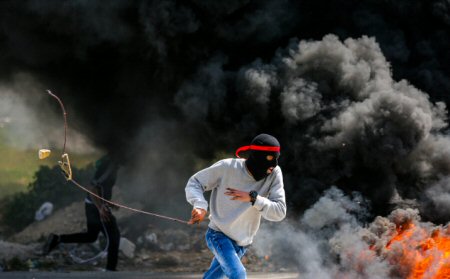 Several dozen Birzeit University students demonstrated today, at Ramallah’s northern border, near an Israeli army checkpoint, in protest against the army’s killing of three young Palestinians near Ramallah and in Nablus, the night before.

Soldiers fired teargas and rubber-coated metal bullets at the students, injuring three, while others suffered from tear gas inhalation.

Soldiers deployed, at the hills near the checkpoint, also fired sound bombs towards journalists covering the event, forcing them to leave the area.

Soldiers, last night, killed Omar Abu Laila, 19, in the Ramallah area village of Obwin, after claiming he was behind the killing of an Israeli soldier and a settler, earlier in the week, near the illegal settlement of Ariel, in the northern occupied West Bank.

Hours later, soldiers shot and killed Raed Hamdan, 21, and Zeid Nouri, 20, in Nablus, after opening fire on their car. Hamdan and Nouri were buried today, in Nablus, in a funeral attended by thousands, and with a shuttered city.