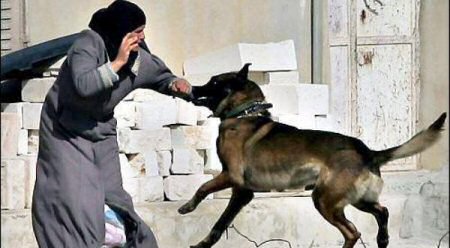 A report by the Israeli rights group, B’Tselem said that the Israeli army has been illegally using force following the killing of an Israeli rabbi last month, during Israeli raids on the West Bank.

The report noted that Israeli use of Dutch army dogs caused the injury of three Palestinians, including a woman, in addition to terrorizing children through releasing them inside homes during raids.

The report cited a violation where Israeli army demolished four houses in Jenin, one of which was demolished while the residents were still inside. B’Tselem also documented the storming of two houses in the villages of the area, during which they incited dogs to attack three women, then body-searched them undressed during the dawn raids.

According to the PNN, the report recounted terrifying details about the use of dogs by occupation officers on February 3, 2018 at 6:00 am, when dozens of soldiers raided the town of Burqin in Jenin, where the soldiers surrounded the house of Mabrouk and Inas Jarrar (40, and 37 years old). Soldiers blew up the entrance door to the building, where the sound of explosions woke them up. The two rushed to bring their children (3 years and 9 years) to their bedroom. Minutes later. the soldiers blew up the door of their house on the second floor.

After the explosion, a dog was released into their bedroom, where it bit the father (Mabrouk) in his left shoulder and knocked him down. Inas tried to free her husband from the dog’s teeth but couldn’t. The boys hid behind the bed and cried.

In an affidavit to B’Tselem, fieldworker Abd al-Karim Sa’di on February 4, 2018, Inas described what happened next: “I ran to the door to ask for help and then I saw soldiers standing at the top of the stairs leading to our house. The soldiers shouted at me in Arabic to take everyone out of the house; one of them demanded that Ahmed Jarrar (the wanted young man) be removed from the house. I begged them to save my husband from the dog but they remained standing and did nothing […] Their fear of my parents in their clothes and could not stand on their feet.”

In his testimony on 14 February, 2018 to B’Tselem’s fieldworker, Abdelkarim Saadi, Mabrouk Jarrar described what happened to him after the soldiers dropped him on the stairs: “At the end of the stairs, one of the soldiers took me out of the dog’s teeth. Then another soldier came and punched me twice on my nose. The soldiers took me to one of the rooms on the first floor of the house. All this time blood was flowing from my left arm and from my nose. Then a big officer came and seemed surprised by what the dog had done to me. The officer showed me by his cell phone and ordered the soldiers to free my hands from the restrictions – which they had already placed. The officer was talking to the soldiers in Hebrew and I understand her a bit.”

Only two and a half hours later, the soldiers evacuated Mabrouk Jarrar for treatment at Afula hospital. There, they tied his legs to the bed and put two soldiers at the door of the room. A week later, on 11 February, the soldiers removed the restraints from his hands and informed him that he had been released without taking action. On the 13th, Mabrouk was transferred to Rafidia Hospital for follow-up treatment.

On February 8, 2018, while Mabrouk Jarrar was still lying in the Afula hospital, about 20 soldiers came to his home at around 3:00 am. Inas Jarrar was at home with her mother-in-law (Houria, 75) and her sister-in-law (Dalal, 50, Dumb and Down’s syndrome). Both came to support and help them deal with what happened. Since the incident, the newborns have stayed at the home of their father’s first wife.

The soldiers stormed the door on the first floor and went straight up to the second floor. When Inas opened the door, they entered the house and asked if there was a man in the house. They also asked Inas if she had money because, if the answer was yes, “it was money from Hamas and they had to confiscate it.”

Enas told them that there was no money and then the soldiers searched the house. When they did not find anything, the soldiers ordered Inas to go into the bedroom to carry out a search of her body. In the bedroom, the soldier asked Inas to take off her clothes completely and stand naked and then searched the same way the other two women who were at home. In an affidavit made on February 8, 2008 by B’Tselem’s fieldworker Abdel-Karim Saadi, Inas said:

“The soldier asked me to take off all my clothes and I did what I was asked for. I thought she would only search me by passing a scanner but I was surprised by her insisting that I take off my underwear as well. After taking off my clothes, the soldier took a look at the clothes she had taken off and then ordered me to turn her back and I was naked. I felt broken and humiliated. I wished death to myself so that I would not witness such moments again. The soldier ordered me to kneel and stayed for two or three minutes – the longest minutes I have ever had. Just then she told me that I could wear my clothes. I believe this soldier does not have an atom of morality or humanity.”

In her testimony to B’Tselem, on 13 February, 2018, Houria Jarrar described what happened to her after leaving the room with the soldier: “Inas and the soldier entered the room where we were. The soldier told me she wanted to search our bodies. I cried and said to her, ‘What do you want from me! I am an old woman and I move with difficulty, you should be ashamed of yourselves!’ Inas and the soldier helped me to take off my clothes as I sat on the bed. I felt helpless and deeply saddened by what the soldier had done to me and I was crying all the time. How can a young soldier force an elderly woman like me to take off her clothes and reveal her nakedness in front of her in this way? After the inspection, the soldier Inas ordered that she help her to remove my daughter Dalal as well. Inas helped her and the soldier searched Dalal’s body. I could not stop crying.”

In another story, at approximately 04:00, security forces stormed the house of Nur al-Din and Samahar ‘Awad, 48, 42, and four children. The soldiers stormed the door of the house and when Samaher awoke from the noise they made, she saw a dog standing in her bedroom. She screamed and her husband woke up and immediately jumped from his bed to the dog to get him out of the room. The dog then bitten him with his right hand and the soldiers who were standing at the bedroom door did not move.

The soldiers ordered the family members not to leave the house and then left themselves a few minutes later. A few more minutes passed and, then, the family heard roads on the back door of their house. In her testimony on February 4, 2018 in front of B’Tselem’s fieldworker, Abdel-Karim Sa’di, Samaher Awad described what happened next as follows: “I was carrying my two-year-old son Karam and he was crying and hugging my chest. I opened the door which the soldiers had ordered, and with a dog attacking me with a hump to my breast, and my son fell upon the ground. My dog ​​banged my chest and then managed to keep it away from me but grabbed my left thigh. I gathered all my strength and managed to push it away from me. All this and the soldiers stand and look without doing anything. All this time my husband was begging the soldiers to take the dog.

“One of the soldiers spoke with the dog in Hebrew and then the dog attacked and grabbed me from my left hand and kept holding it for several minutes until another soldier came,” Samaher said. “I started bleeding heavily. My husband asked them to treat my hand but they did not care.”