B’Tselem Detainee: ‘6 days in Israeli jail and no questioning, as usual’ 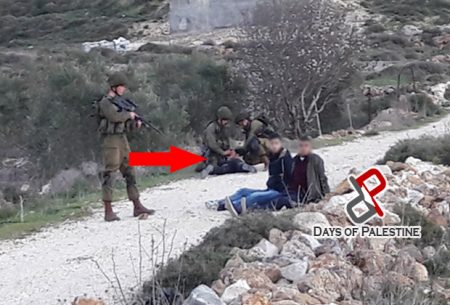 Israeli rights group B’Tselem said, on Tuesday, that the Israeli occupation forces kidnapped one of its volunteers, kept him in jails for six days without any reason.

B’Tselem said, in a report about the incident: “On Friday as 4pm, about 20 to 30 residents form the village of Madma in the south of [the West Bank] city of Nablus. They were in a picnic with their families.”

The report continued, according to Days of Palestine: “At 6:15pm, five or six Israeli soldiers from the area of the [illegal] Israeli settlement of Yitzhar, which is about 1.5km away from Madma, approached the Palestinian families and fired tear gas at them.”

Afterwards, the report said: “Three soldiers continued walking towards the Palestinian families, while the others got away towards the south.”

Watching what was going on, B’Tselem volunteer Ahmed Ziyada, 25, arrived in the scene. He is a resident of Madma and get out of his home after seeing the tear gas being fired at the Palestinian families.

Ziyada approached the three Israeli soldiers with his camera taking footage of them and the violations.

“The Israeli soldiers asked for his ID and he showed it to them and told them that he is a volunteer with B’Tselem,” the report said. “An argument took place between Ziyada and the three soldiers, who asked him to go home.”

According to the report, Ziyada refused to go home and the soldiers decided to kidnap him. “They used their radio to call for more soldiers. They beat him to the ground, put his hands behind his back and tied them with a plastic clip,” the report said.

“One of the soldiers put his foot on my head and the others continued beating me,” Ziyada told B’Tselem. “They took me to the Huwwara Military Camp, where he spent five days under investigation. On sixth day, he was taken to Salem Court as he was accused of undermining soldiers’ work.”

Then, Ziyada was turned back to Huwwara Military Camp and then was released on bail of NIS500. “He was released at 11:30pm,” B’Tselem report said and was left to go home alone.

B’Tselem said that such actions show that the Israeli soldiers easily use their power in an arbitrary way to harass Palestinians and their families, as well as to beat the Palestinians if they wanted to face the Israeli violent interference in their private life.

The Israeli rights group said that this incident, like many others, go without investigation or punishment of any of the perpetrators.