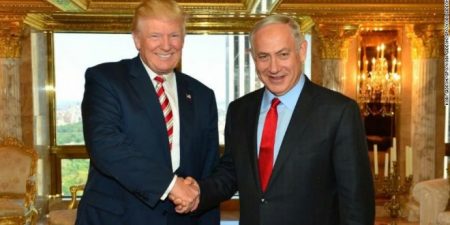 Israeli news site Ynet reported, according to WAFA, that Trump’s Special Representative for International Negotiations, Jason Greenblatt, and Netanyahu met and discussed settlement construction in the oPt and ways of renewing negotiations with the Palestinians through a regional summit.

It said the meeting was convened in an attempt, by the new US administration, to renew peace talks with the Palestinians.

According to Israeli media, Netanyahu and Greenblatt are in the process of reaching an understanding regarding settlement construction, which is illegal under international law.

They discussed ways to launch negotiations with the Palestinians through a regional summit, which would move peace talks forward.

The five-hour meeting, attended by Israel’s ambassador to the US Ron Dermer, focused on the efforts of the two sides in order to reach understandings between Israel and Trump’s administration regarding settlement construction, activities and expansion.

The Israeli newspaper said that, despite the opposing positions between the two sides, an understanding regarding settlements can be reached.

It also said that, similarly to Sharon-Bush understandings, the Trump administration is concerned about reaching an understanding with Netanyahu’s government, and allowing Israel to build inside settlements.

However, it was added that Netanyahu is looking forward to building on areas close to settlements, which means allowing Israel to expand settlements on 10% of the West Bank area.

The meeting tackled another issue, namely the construction of a new settlement to house settlers who were evicted from “Amona” outpost in February.

Despite the opposition of Trump’s administration to building new settlements, Netanyahu seeks to convince the US that, with regards to Amona’s settlers, the Israeli government does not seek to build a new settlement, but to relocate the settlement outpost.

According to a statement released by Netanyahu’s office, Greenblatt reaffirmed Trump’s commitment to Israel’s security and to the effort to help Israelis and Palestinians achieve a lasting peace through direction negotiations.

Netanyahu said that he is fully committed to achieving prosperity of the Palestinian economy, affirming that it means improving opportunities to achieve peace in the region.

He hoped to “do good things” with Greenblatt, who responded that he thinks “they’ll do great things together.”

In Washington, US State Department spokesperson Mark Toner told reporters that Greenblatt would listen and discuss the views of the leaders in the region, and their opinions regarding the current situation, as well as how a progress can be made towards peace, eventually.

“Settlements in the occupied West Bank will be discussed,” Mark said, not expecting an immediate action on this issue, “we consider it a challenge that has to be addressed at some point.”