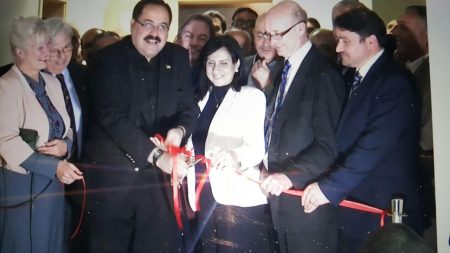 A natural history museum for dinosaurs and large insects opened on Tuesday, at the Convention Palace in Bethlehem.

Minister of Education Sabri Saidam, Minister of Culture Ihab Bseiso and Bethlehem Mayor Vera Baboun inaugurated the museum in the presence of Harry Leu, owner of the international exhibit, who said at the ceremony that after reaching retirement age he decided to contribute his exhibition of dinosaurs and large insects to the children of Palestine to educate them and entertain them.

Saidam said, according to WAFA, that the museum will provide an opportunity to the Palestinian children to learn about dinosaurs at a time they have been denied opportunities to visit world museums and exhibitions.

PNN further reports that the display returned to Bethlehem in a permanent natural history museum for children, which, for the first time, displays eye-catching interactive life-size dinosaurs and giant insects.

The museum features 6,500 sq ft of dinosaur and insect displays, including giant scorpions, snails, crickets and life-size roaring dinosaur exhibits, which allow children to expand their imagination and learn about dinosaurs.

Present at the inauguration as well was Peter Downey, founder of the Bethlehem-Bath Links charity, and mayor of the British city of Bath.

The exhibition was donated by Bethlehem-Bath Links, which creates cultural, business & sporting links between the World Heritage sites of Bath and Bethlehem, expands education and knowledge of natural history despite the ongoing occupation which strangles the West Bank, which allows it to enhace tourism attraction to the site.

Downey said, “This is a huge achievement thanks to the incredible generosity of Henry and Edith. It will add a new attraction for Bethlehem’s residents and two million annual visitors and will generate much needed income for the city. It also demonstrates that there is a great deal of support for Palestine in Britain and I am very much looking forward to going out to Bethlehem with the delegation from Bath for the grand opening of the museum on Tuesday.”

The Mayor of Bath, Councillor Paul Crossley, arrived in Bethlehem with Downey and the charity’s patron and Bath & NE Somerset Cabinet member, Cllr Martin Veal, to prepare for the opening event. The councilors, who are travelling at their own expense, will meet the Mayors of Bethlehem, the Ministers of Education, Tourism, Agriculture and Economic Affairs and local business leaders to officially hand over the dinosaur & insect exhibitions and to discuss tourism, World Heritage, commercial and cultural links between the two cities.

Director of the Bethlehem Convention Centre pointed out the links between Bath and Bethlehem, since the Solomon’s Pools historical site, alongside the convention palace, was built by the Romans and Beth is the city of Roman baths.

“This is a truly wonderful gift. It will help to establish the Bethlehem Convention Palace and Solomon’s Pools as a major visitor centre over the coming years and is a major step towards our ambition of obtaining UNESCO World Heritage status for the historic King Solomon’s Pools site. We are so pleased that Bath, which is England’s only World Heritage city, is helping us to achieve our aim and we are very grateful for their generous support,” George said.

The exhibition promotes cooperation between different cities of the world to that promotes knowledge of natural history and revives links historical links through an educational space that goes beyond entertainment.