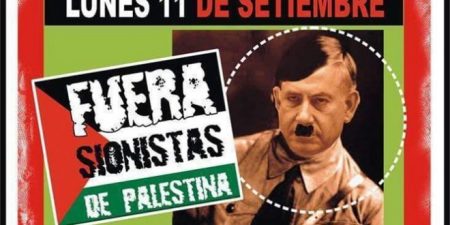 Pro-Palestinian activists in Buenos Aires hung posters of Israeli Prime Minister Benjamin Netanyahu in the Hitler’s Schutzstaffel  Nazi uniform, prior to his visit to Argentina.

The signs had pictures of  Netanyahu under the words: “Wanted for crimes against human rights and the genocide of the Palestinian people,” where he is shown wearing the SS  Nazi uniform, and is depicted with a mustache and haircut reminiscent of Adolf Hitler. The signs called on the public to attend an anti-Zionists demonstration titled “Kick the Zionists and Netanyahu out of Palestine”. The headline of the poster read: ‘Disgusting!’

The posters call out Netanyahu as a war criminal, especially for his war crimes in Gaza, the latest being the 2014 aggression which killed at least 2,000 Palestinians, 500 of which were children, and left over 10,000 people wounded. In addition, his government is also still expanding illegal settlements in the occupied West Bank, and carrying out collective punishment policies against Palestinian people, including home demolitions, ID withdrawals, wide arrest campaigns and more.

Netanyahu and his wife were also accused with fraud charges, recently.

Deputy Chief of the World Zionist Organization (WZO) and Head of the World Anti-Semitism Campaign, Yaakov Hagoel, said in response that they view these signs with utmost severity.

“This is a historic visit, and the WZO will continue to fight this scourge of anti-Semitic activity,” Hagoel said in a statement.

Argentina is Netanyahu’s first stop on a multi-state tour to Latin America, as he will be the first Israeli  Prime minister to visit Latin America.

He is scheduled to meet with President Mauricio Macri,  as they will sign a series of agreements on public security, customs and social insurance as well as an archives agreement regarding the Holocaust.

According to Israeli media, Netanyahu will attend ceremonies in Embassy Square in Buenos Aires, where an anti-Israeli attack was carried out in 1992, and will visit the Jewish community building (AMIA),  the site of another attack in 1994 that killed 85.