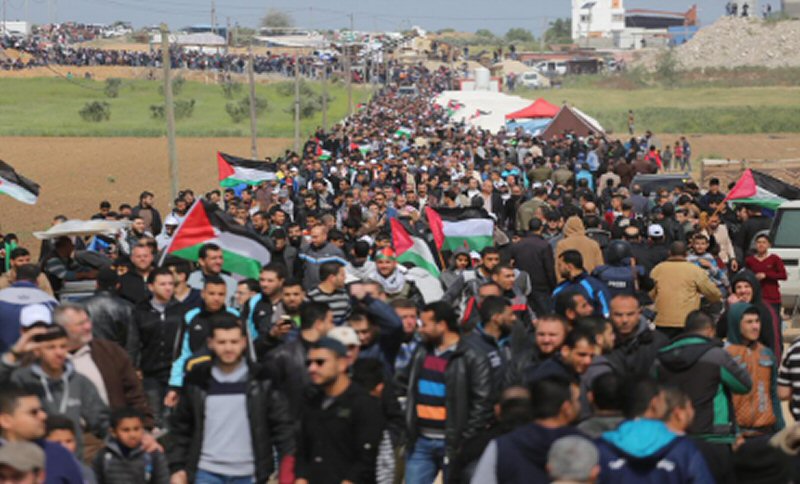 The Higher National Committee for Return and Breaking the Siege in Gaza called for an unprecedented millionth  participation on Saturday, coinciding with the first anniversary the Return Marches.

In a press conference held on Monday, the commission said that it would not step back from land and sea marches until it achieves its goals, stressing that the Return Marches are a peaceful movement of the Palestinian people to restore their rights.

“It will witness [a] million [in] Palestinian masses that will restore glory to our cause and strength of our people,” he said, calling on the national community to mobilize and participate in it.

He stressed, according to Al Ray, that the March of Return and Breaking Siege, with all available resources, will continue, explaining that “it emphasizes the unity of our people and the vitality of its cause, and will never stop until the achievement of its objectives in full.”

Since 30 March, 2018, Palestinian citizens have been holding demonstrations in “Return Camps”, in the eastern Gaza Strip’s five governorates, calling for the right of return and the breaking of the 13-year-old blockade.

Between 26 and 27 March 2019, Al-Haq, along with other Palestinian, regional and international organizations, sent letters to the diplomatic community in the occupied Palestinian territory (OPT), the UN Secretary-General and High Commissioner for Human Rights, calling on them to take action ahead of the one-year commemoration of the Great Return March, to ensure that Palestinians’ rights to life and to freedom of peaceful assembly are protected.

Since 30 March, 2018, the Israeli occupation forces have systematically and deliberately resorted to lethal and other excessive force to suppress the Great Return March in the occupied Gaza Strip, killing at least 197 Palestinians within the context of the demonstrations, including 42 children, eight persons with disabilities, three paramedics, and two journalists.

In addition, over 29,000 Palestinians have been injured, according to the World Health Organization,  including over 6,500 by live ammunition, of whom more than 1,200 have been left with complex limb injuries requiring multiple surgeries and long-term follow up.

Last May, Al-Haq and other human rights organizations sent an open letter to the UN ahead of the 70th commemoration of the Palestinian Nakba, as part of the Great Return March. The UN failed to take action to prevent the brutal killings and massive suppression of peaceful demonstrators in the Gaza Strip on 14 May.

As large-scale civilian protests are expected to take place, once again, on and around 30 March 2019, Al-Haq urged “the international community to take meaningful action to prevent further unnecessary loss of life and injury by the Israeli occupying forces, which entails individual criminal responsibility, as found by the UN Commission of Inquiry on the 2018 OPT Protests.”

“In this context, Israel must be strictly reminded of its obligation under international human rights law not to resort to lethal and other excessive force against Palestinians participating in the “Great Return March”, and to ensure the protection, in particular, of individuals with special protected status under international law, including children, persons with disabilities, health workers, and journalists,” Al-Haq and other rights group said in a statement, according to WAFA.