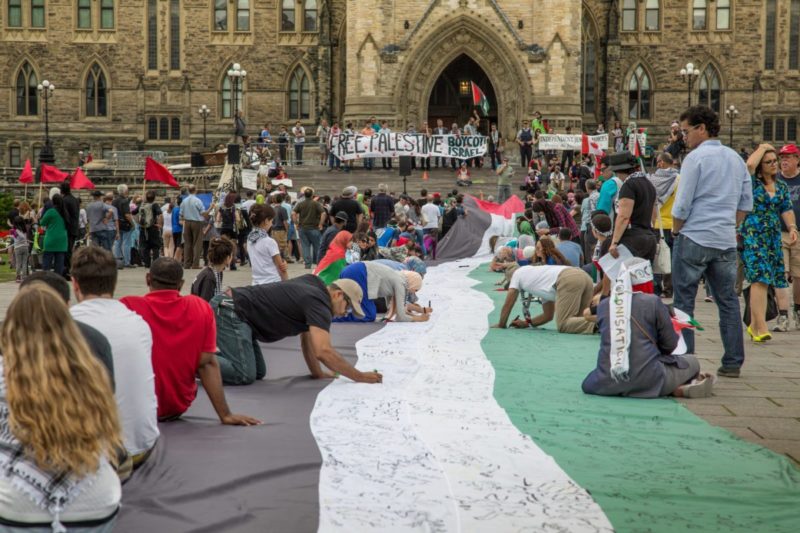 by Ramona Wadi, Days of Palestine

UN resolutions on Palestine are given more prominence than the Palestinian people themselves. What happens within the UN premises sets an agenda that is difficult to challenge, mainly because international consensus rarely makes it beyond resolution texts to implementation. As a result, an unexpected shift from the predictable votes, particularly if perceived as an affront by Israel, ends up becoming the focus of both scrutiny and illusions.

Canada’s vote in favour of Palestinian self-determination last November was the subject of much pondering over whether President Justin Trudeau was promoting a change in his country’s foreign policy. However, this week Trudeau set the record straight – there is no shift in Canada’s support for Israel.

“The government felt that it was important to reiterate its commitment to a two-states-for-two-peoples solution at a time when its prospects appear increasingly under threat,” Trudeau stated. “We will continue to stand out strongly against the singling out of Israel at the UN. Canada remains a steadfast supporter of Israel and Canada will always defend Israel’s right to live in security.”

In explaining its vote, Canada departed from the two-state paradigm. It was careful to assert that Israel is “unfairly singled out for criticism” at the UN. Palestinian self-determination and the two-state compromise are merely catchphrases at the UN, which means that Canada’s vote in favour was a mere embellishment lacking commitment to Palestinian political rights.

Undoubtedly, it signified opposition to the US unilaterally trampling over Palestinians’ rights, in particular with its latest statement declaring settlements are not illegal.

But the vote in itself changes nothing except a departure from the usual formalities. Canada could have abstained, yet its choice to vote against has not signaled any change for Palestinians, other than temporary jubilation at the news. The point of contention is not whether Canada voted for or against. The country’s anti-BDS stance and its upholding of Israeli security narratives even when war crimes were being committed against Palestinians in Gaza are indicative of allegiance to Israel – much more than a single departure from its usual voting patterns regarding UN resolutions on Palestine.

In addition, Trudeau has clearly reaffirmed his government’s support for the Zionist colonial project, in much the same way as the rest of the international community voting in favour of UN resolutions have done countless times. The difference is minimal and the outcome is the same. As long as the two-state framework is promoted and, within the current developments, not only as the only purported option but also in opposition to the US deal of the century, the fact remains that international action against Palestine has overshadowed any resonance that resolutions might have had for Palestinians.

Hence, the ineffectiveness of UN resolutions has far greater impact, in particular since the US has clearly shifted itself out of international consensus. For decades, UN resolutions have not contributed to a change in Palestine’s quest for its political rights. On the other hand, political passivity about Palestine has enabled Israel to extend an interim period to an interminable presence and this is what Canada is committed to supporting, regardless of a one-time change in its voting preferences.