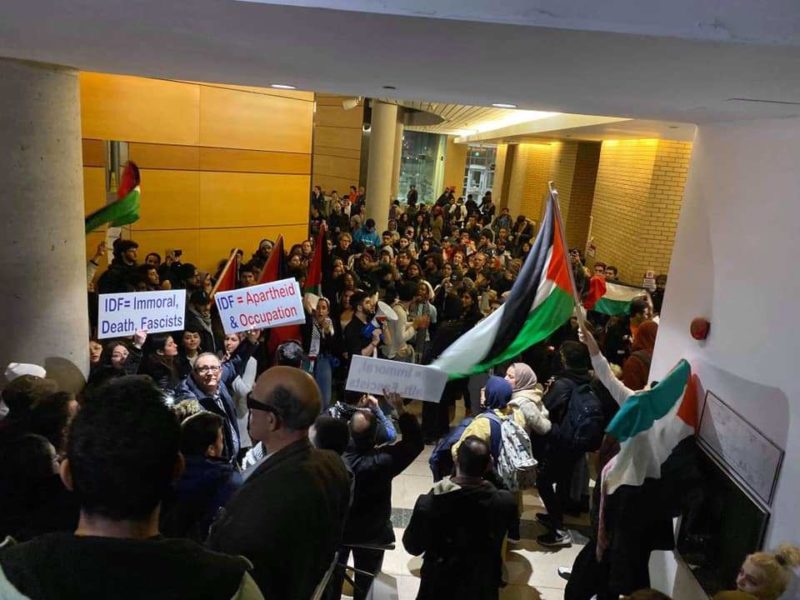 Samidoun Palestinian Prisoner Solidarity Network expresses our strongest solidarity with Students Against Israeli Apartheid at York University (SAIA York) and denounces the decision of York University president Rhonda Lenton to suspend SAIA as an organization after its members were the victim of racist, anti-Palestinian assaults as they protested the presence of Israeli Occupation Forces soldiers on campus.

On 20 November, SAIA York organized a mass protest against an event organized on campus by Herut Canada, a far-right, Zionist organization that lauds the ongoing apartheid, war crimes and crimes against humanity being practiced by the Israeli state against the Palestinian people. The event was scheduled two weeks before the Israeli consulate in Toronto announced that it would be launching a recruitment drive for the Israeli occupation army at its offices. University president Lenton suspended Herut Canada along with SAIA York, but this represents a grave injustice: punishing the victim for upholding their rights along with the perpetrator of racism and promotion of an occupation army.

Herut Canada is an affiliate of the Israeli organization called Herut, investigated even by the Israeli state for its racist rhetoric in 2006. As noted by South African students, “In a 1948 letter to the New York Times, Albert Einstein, Hannah Arendt and dozens of other Jewish intellectuals denounced Herut as ‘a political party closely akin in its organization, methods, political philosophy and social appeal to the Nazi and Fascist parties.’”

The mass protest made clear, through its exceptionally large turnout, that the York Univeristy Community does not accept the promotion of military occupation and apartheid on campus. Furthermore, the hosting of Israeli soldiers to promote war crimes and ethnic cleansing on campus violates the university’s own policies against racism, prejudice and discrimination.

As the demonstration continued, protesters were attacked by members of the Jewish Defense League, a violent, extreme Zionist organization linked to the assassination of Arab-American community leader Alex Odeh. Despite requests from students to remove the members of this off-campus, violent group, they were ignored – even though the university’s own letter to the JDL made clear, days before the event, that it was aware of the group’s propensity for violence. (Even Hillel, the pro-Zionist campus association, declined to sponsor the Herut event, it should be noted.)

Instead, Palestinian students and those in solidarity with them were subjected to violent attacks, including kicks, shoves and being spit on while being showered with racist, sexist slurs. One teaching assistant at the university was punched in the head by a supporter of Israeli apartheid, with injuries so severe that he was hospitalized. SAIA York itself has detailed the level of racist abuse that their members, supporters and allies were subjected to at the hands of apartheid apologists on campus.

In addition, CUPE 3903, the union representing contract faculty, teaching assistants, graduate assistance and part-time librarians and archivists at York, noted, “These violent outsiders spat at, shoved, and threatened counter-protesters, attempted to steal their phones, attacked marshals who were trying to keep the peace, and stole Palestinian flags so that they could beat counter-protesters with the flagpoles.”

Nonetheless, despite vast amounts of video footage documenting nearly all aspects of the protest, it was SAIA York and their allies who have since been attacked once again – this time by a series of Canadian politicians, including Toronto mayor John Tory, Ontario premier Doug Ford and even Prime Minister Justin Trudeau.

Despite no documented evidence of such being presented, they have been falsely accused, repeatedly, of “anti-Semitism” for protesting the presence of a racist occupation army serving an apartheid state on their campus. Almost all of these politicians falsely claimed that the “Jewish community” organized the event at York, rather than the reality: a far-right, extreme Zionist organization whose event was even rejected by Hillel. These politicians’ statements are, in effect, tarring the Jewish community as a whole with the brush of apartheid support and racist, violent attacks on Palestinian students. As Davide Mastracci noted, “The conflation of Judaism and Zionism is widely cited as a form of antisemitism, and yet this is exactly what politicians supposedly concerned about it have done by labeling a fringe Zionist event as a primarily Jewish one instead.”

The right-wing Zionist publication, “The Jerusalem Post,” touted a claim that protesters were heard shouting “back to the ovens,” despite a complete lack of credible evidence supporting this claim. The Jerusalem Post reporting and other Zionist claims have also attempted to demonize and delegitimize Palestinian struggle and resistance by linking these false allegations to protesters chanting “Viva Intifada,” in yet another effort to portray support for Palestinian anti-colonial struggle as anti-Jewish rather than what it is: anti-racist, anti-colonial and liberation-oriented.

While Palestinian students in particular have been villainized in this opportunistic political narrative embraced by a series of apologists for Israeli war crimes and continuing Canadian support for the Israeli apartheid state, Jewish students and others who were part of the protest have been entirely disappeared in favor of the JDL and Herut ultra-Zionists and their anti-Palestinian racism.

Independent Jewish Voices published the testimony of a Jewish activist who joined the protest: “Whatever you are hearing about this event from Justin Trudeau, Doug Ford, or your favourite bourgeois media organ – all of it is a lie. None of the chants were in any way antisemitic, and I felt incredibly safe and loved among my comrades in that space. In contrast, the IDF supporters were raucous, offensive, aggressive, constantly trying to start fights, swore repeatedly, made racist and homophobic personal insults at everyone they encountered, and even physically attacked students. Everyone involved in permitting this event to take place should be ashamed and penalized. All love and solidarity to those who showed up to shut it down.”

The impunity enjoyed by the JDL for its violence against Palestinian and solidarity students mirrors that of the apartheid state it supports, Israel, at the international level, protected and perpetrated by the same colonial and imperialist powers. And the mandate that the perpetrators (Herut Canada) and the victims (SAIA York and fellow students) should instead be disciplined together and forced into ‘dialogue’ also reflects the ongoing demands that Palestinians be criminalized for asserting their most basic rights, including the right to protest apartheid on a Canadian university campus.

These attacks also reflect the state-sponsored Zionist efforts to portray Palestinian activists and solidarity movements as “terrorist” for expressing their support for Palestinian liberation and even for supporting the boycott, divestment and sanctions (BDS) campaign, a call backed by hundreds of Palestinian civil society groups to boycott Israeli apartheid and the corporations that sustain it.

Indeed, over the years, SAIA York has secured a number of significant victories – and has also suffered serious repression – over the years. Following a peaceful divestment protest in 2013, SAIA York’s club status was revoked. Since that time, and after SAIA York regained its status, major student organizations, including the York Federation of Students, YUGSA and CUPE 3903 have all endorsed boycott, divestment and sanctions. SAIA York has been a part of and an ardent supporter of social justice struggles on and off campus, including Indigenous struggles for justice and contract workers’ strikes for a just contract. At the same time, President Lenton has participated in Israel lobby-sponsored conferences attempting to cast Palestine justice activism as “anti-Semitism,” for which she was condemned by Independent Jewish Voices and the York Federation of Students as well as SAIA York.

In many ways, SAIA York – like the BDS campaign and the Palestinian liberation movement overall – has been targeted for smearing, repression and criminalization because of its success in raising awareness and building broad coalitions for justice in Palestine. Indeed, one week later, the York Federation of Students’ Annual General Meeting unanimously adopted a strong resolution defending the rights of students to mobilize against the far-right, war and imperialism on campus and calling for protests against Israeli state representatives and other imperialist powers. The targeting of SAIA York is not far from the ongoing raids, arrests and administrative detention orders issued by the Israeli state targeting Palestinian student activists in Palestine, nor from U.S. President Donald Trump’s executive order that aims to repress student activism and even faculty scholarship on Palestine.

We join the calls of Faculty for Palestine for President Lenton to immediately revoke the suspension of SAIA York and instead open an official and formal investigation into the actions of Herut Canada and the Jewish Defense League to hold the perpetrators of violence and racist intimidation on campus accountable, as well as to protect the rights of participants in the 20 November protest. Further, York University itself must take responsibility for its role in permitting and facilitating the attacks on its students not only by Zionist extremists on the night of 20 November but also in the ensuing weeks by prominent Canadian politicians.

Finally, it is clear that SAIA York and other activists at York University are not being deterred from their commitment to building the BDS campaign and advocating for Palestinian liberation despite the vicious attacks to which they have been subjected. We also affirm that the goal of our struggle is not only to defend our rights to organize and to advocate, but to struggle for the freedom of Palestinian prisoners, Palestinian people and Palestinian land from apartheid, occupation, Zionism, racism, colonialism and imperialism.