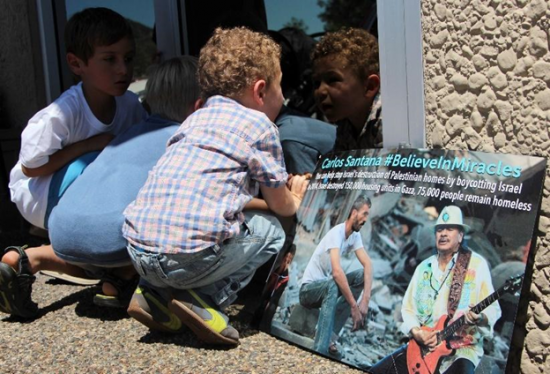 Carlos Santana came to fame during the 70s – 80s, and was considered to be on par with guitarists like John McLaughlin.

On June 28, representatives of the Middle East Children’s Alliance (MECA) and the Jewish Voice for Peace (JVP), including Palestinian families with children, attempted to deliver a petition signed by 25,000 people.

The petitioners were urging Carlos Santana to cancel the concert and respect the call for a cultural boycott of Israel in support of Palestinian human rights.

MECA and JVP reports, however, that staff at Santana’s Milagro Foundation refused to even open the door.

Santana also failed to respond to multiple attempts to contact him by the Palestinian Academic and Cultural Boycott of Israel (PACBI), including members from the Israeli group Boycott from Within, reports the international Boycott Divestment Sanctions (BDS) movement.

During the 1970s, Santana scored an international hit with his “Let The Children Play” on his vinyl (those were the days) album “Carnival”.

Disgruntled Santana fans are likely to think that it’s about time that Carlos cancels his carnival in Tel Aviv and faces the music, if for no other reason than for the Palestinian children in bombed out Gaza or the occupied West Bank.

But, then again, not every musician has the integrity of a Roger Waters and the countless other musicians who are too virtuous to act as propaganda props for an Israel that bombs schools and passed legislation that authorizes soldiers and police in occupied Palestinian territory to shoot children for throwing rocks.

As for me, personally, who enjoys playing guitar on a daily basis when I want  want to clear my mind from working with editing nsnbc international, all that I will say to Carlos is this:

Carlos, the records and CDs with your music will be thrown into the garbage today, and the first that will go will be your “Love, Devotion, Surrender”. Rest assured that I’ll be breaking them so nobody can pick them up from the trash to use them.