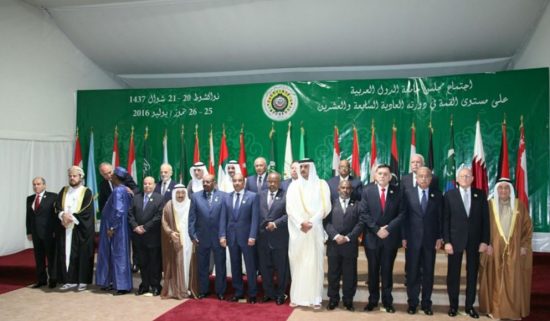 nsnbc : In response to the final statement of the 27th Arab Summit, in the Mauritanian capital Nouakchott, the Popular Front for the Liberation of Palestine (PFLP) stressed that it has no confidence in what it describes as a carbon copy of the resolutions of the Arab summits, in recent years. The PFLP also affirms that the Arab League (AL) has, long ago, lost the Arab peoples’ confidence as a means to seriously express their aspirations.

The PFLP noted that there is no benefit from Arab conferences or summits if they have lost the central cause and credibility in defending the interests of the Arab nation. The PFLP also denounced the AL for issuing decisions in order to serve the agendas of Arab regimes while feeding the fire of sectarian strife in the region, while redirecting the compass away from the central conflict.

The PFLP stressed that the Arab League, as it now stands, bears little to no resemblance to the original vision of the late Egyptian President Gamal Abdel Nasser, and that the AL, today, is fundamentally incapable of addressing the Arab situation or supporting the Palestinian cause. The PFLP notes that the AL views the item on the Palestinian cause as a call to frequent verbal speeches that neither provide nor delay anything and do nothing to contribute to addressing the positions of some Arab states who have participated in the erasure of the Palestinian cause, as a primary and central issue, on the agenda of Arab summits, placing it instead as a secondary concern.

The Front expressed its rejection of the final statement’s support for French efforts to convene a so-called international peace conference, noting that the French initiative does not provide a minimum of Palestinian rights, and seeks to impose an alternate international reference below the level of international law and UN resolutions, which “stipulate the rights of our people to return, self-determination, and an independent, sovereign state.”

The PFLP also stressed that it noted with amazement, the statement’s words on the importance of joint action and unity of purpose,the continuing and dedicated efforts of some Arab regimes to create a state of instability and threaten any joint Arab front, or unity of purpose, that is so necessary in order to resist the Zionism and confront its racist and fascist nature and policies.

The PFLP called upon the Arab peoples, organizations, trade unions, and student movements to develop a popular movement and unity parallel and alternative, to these structures, that works to re-orient the Arab role toward the Arab issues, particularly the Palestinian cause. The Arab nation is subjected to a state of destruction and plunder 100 years after the Sykes-Picot project of colonial division and the Balfour declaration, calling for the formulation of a popular Arab strategy for confrontation and struggle, stressed the front.

The Popular Front for the Liberation of Palestine is the second-largest member of the Palestine Liberation Organization (PLO), the only organization that can legally represent Palestine in international affairs. Although, the PFLP also admits that many of the PLO’s most central functions have, since the signing of the Oslo Accords in 1993, been usurped by the Al-Fateh dominated Palestinian Authority.

It is noteworthy that Egyptian President Abdel Fateh al-Sisi did not attend the summit. Al-Sisi canceled his attendance the day before his scheduled departure to Mauritania, and decided to send Prime Minister Ismail Sherif instead. The decision was reportedly made after it transpired that there were plans to assassinate Al-Sisi in Nouakchott.

It is also noteworthy that the Arab League endorsed the illegal war against Libya that has thrown the most developed African nation into chaos. The AL also suspended Syria’s membership, despite the fact it had been known that networks within several countries, including the UK, as well as Arab League members Qatar and Saudi Arabia had planned the overthrow of the Syrian government with the help of “rebels”, since the discovery of major gas reserves in the Persian /Arab Gulf, in 2007. Former French Foreign Minister Roland Dumas went on the record, stressing that top-British officials, in 2009, asked him whether he wanted to participate in ousting the Syrian regime with the help of rebels.