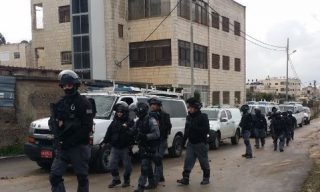 On Thursday at night, the soldiers invaded a few homes in Wad Qaddoum neighborhood, in Silwan, and kidnapped two young men, identified as Kathem Razem and Ramzi Razem.

The soldiers also installed a roadblock at the Wadi ar-Rababa Junction, in Silwan, stopped and searched dozens of cars, before interrogating many Palestinians, and imposed high fines.

The Palestinians in Silwan expressed fears that this military campaign could be the beginning of a larger one that would likely include every part of the town.

The military initiated a massive invasion and search campaign, starting Wednesday, when the soldiers stormed many homes in Silwan, kidnapped 33 Palestinians, in addition to invading stores and imposing high fines.

On Thursday at dawn, the army invaded the Deheishe refugee camp, south of the West Bank city of Bethlehem, searched and ransacked many homes before kidnapping four Palestinians, and injured at least three.

On Wednesday, the Israeli navy attacked Palestinian fishing boats, close to the Gaza shore, and kidnapped two fishers. Some of the boats were hit with live rounds before the soldiers assaulted them.