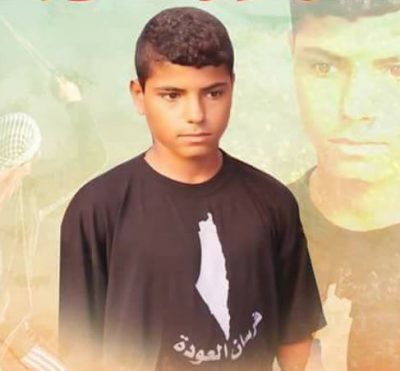 The Palestinian Health Ministry has reported that a child died, Saturday, from serious wounds he suffered a day earlier during the Great Return March procession, near the perimeter fence, east of Rafah, in the southern part of the Gaza Strip.

The Ministry said the child Ahmad Misbah Ahmad Abu Tyour, 16, was shot in the femoral artery in the thigh, before he was rushed to surgery, and then to the Intensive Care Unit at a Palestinian hospital.

It added that the child remained in a serious condition until he succumbed to his wounds, Saturday.

On Friday, Dr. Ashraf al-Qedra, the spokesperson of the Health Ministry in the Gaza Strip, has reported killed one child, identified as Bilal Mustafa Khaffaja, 17, and injured 395 Palestinians, including 100 who were shot with live fire. Among the wounded are 35 children, three medics and three journalists.

He added that the soldiers have killed 174 Palestinians, and injured more than 19.600 since the Great Return March processions started in the coastal region on Palestinian Land Day, March 30th, 2018.