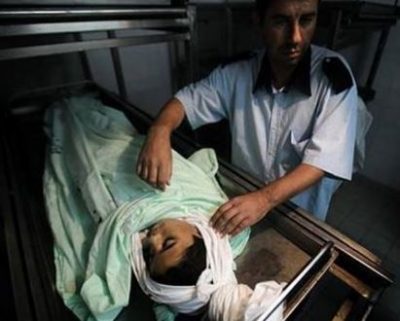 The Palestinian Health Ministry in Gaza has reported that a child was killed, on Wednesday evening, after Israeli soldiers opened fire into an area east of the al-Qarara town, northeast of Khan Younis, in the southern part of the Gaza Strip. The Israeli army issued a statement denying any involvement in the shooting.

Dr. Ashraf al-Qedra, the spokesperson of the Health Ministry in Gaza, said the soldiers, stationed on a military tower across the border fence, east of Khan Younis, fired many live rounds, one of them killing the child.

Dr. al-Qedra added that the child, identified as Abdullah Nasser Abu Methyef, 10, was shot with a live round in his back, and died from his wounds at Nasser Hospital, in Khan Younis.

He also stated that eyewitness accounts confirm the fact that the soldiers shot the child, in contrary of Israeli military allegations, adding that the child was killed close to his house.

Dr. al-Qedra was referring to a claim by the Israeli army spokesperson, Pauli Mordechai, who said that “the news accusing the army of killing a child are propaganda, used by various Palestinian and Arab news agency.

Mordechai also claimed that the source of fire that killed a child was “from a wedding, where some people were firing live rounds into the air.”

Eyewitnesses contradicted the statement, and said the source of fire clearly came from the Israeli military base, across the border fence.

Such attacks against lands and homes close to the border fence in the besieged Gaza Strip, take place on nearly a daily basis, and in many cases have led to casualties, including numerous fatalities.