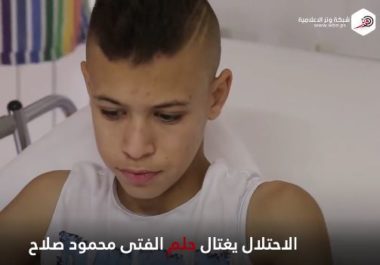 Israeli soldiers released, Tuesday, a Palestinian child from the al-Khader town, south of the West Bank city of Bethlehem, a month after they shot him with an expanding Dumdum bullet in the leg, leading to an amputation.

The Palestinian child, Mahmoud Hussein Salah, 14, was abducted by the soldiers who shot him, and was later moved to Shaare Zedek Israeli Medical Center, where his left leg was amputated, due to the severe injury he sustained.

Salah said his dream was to become a famous soccer player, before the soldiers shot him with a Dumdum expanding bullet, in direct violation of International Law.

Commenting on his injury after his release, the child told the Palestinian Watar Broadcast Network (WBN) that he and his friends were playing soccer, and the ball was kicked out of the field before he ran after it. 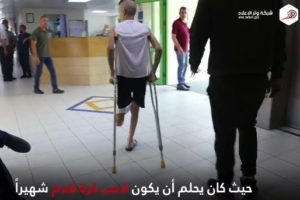 “I located the ball and carried it before I heard a soldier shouting at me and almost instantly started shooting,” Salah said, “I ran just a few feet, then I fell, and the soldiers ran towards me and started kicking and beating me up, and later took me behind the (Annexation) Wall where I was kept for about two hours, until an ambulance came and took him to the hospital.”

“At the hospital is where I went into a coma, and the next day they performed a surgery and amputated my leg  — I had no idea they did that until my mother came and informed me of what happened,” he added, “It was like a dream, or rather a nightmare to me, is my leg there, or it isn’t?!”

Commenting on the injury of his child, the father Hussein Mousa Salah, said his mother went to see him after he was injured, but could not find him, and later managed to reach him at the hospital.

It is worth mentioning that Israel continues to use the illegal expanding bullets against the Palestinian people, in direct violation of the International Law, especially The Hague Convention of 1899, Declaration III, which prohibits the use of expanding bullets.