Child Struck With Teargas Bomb In The Head Near Bethlehem 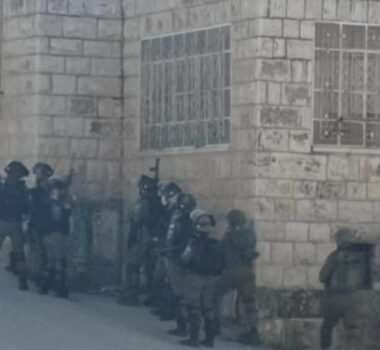 Several Israeli army jeeps invaded, on Tuesday afternoon, the town of Teqoua’, east of Bethlehem, south of occupied Jerusalem in the West Bank, before shooting a child with a teargas bomb in the head and causing many to suffer the effects of teargas inhalation, in addition to abducting a teenage boy.

Media sources said many Palestinians protested the invasion, before the soldiers fired a barrage of gas bombs, concussion grenades, and rubber-coated steel bullets at random, some striking homes.

They added that a child, only 9 years of age, was struck with a gas bomb in the head, while several Palestinians, including many in their homes, suffered the effects of teargas inhalation.

The soldiers also fired rubber-coated steel bullets and gas bombs in the areas of the eastern and western entrances of the town, before abducting a teenage boy, 17 years of age.

The Israeli army claimed its soldiers invaded Teqoua’ after some Palestinians reportedly hurled stones at cars of illegal colonialist settlers on the bypass road, which allegedly led to the injury of one colonist.