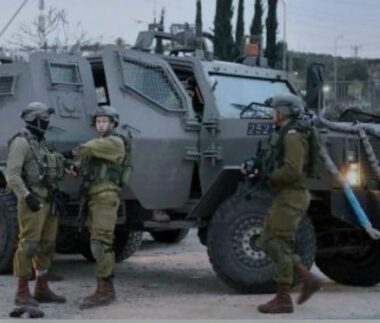 Israeli soldiers abducted, on Wednesday at dawn, twenty-nine Palestinians, including former political prisoners, after the army invaded and ransacked dozens of homes in several parts of the occupied West Bank.

Several army jeeps invaded the al-Faqeer area, north of Yatta town, south of the southern West Bank city of Hebron, before storming and ransacking many homes, and abducted two Palestinians.

Local sources said the soldiers abducted Mohammad Khaled Makhamra, 25, and a nonviolent activist with the Popular Committees Against the Annexation Wall and Colonies, Khaled Suleiman al-Adra. 50.

In Jenin, in northern West Bank, the soldiers invaded and searched homes in Qabatia town, south of the city, before abducting Bassem Mohammad Tazaz’a and Yousef Bassem ‘Assaf.

Protests erupted in Qabatia after the army invaded it, and the soldiers fired live rounds and concussion grenades.

In Kafr Ra’ey village, south of Jenin, the soldiers abducted a former political prisoner, identified as Ahmad Milhim, after storming his home and ransacking it.

It is worth mentioning that the soldiers invaded and searched many homes in the villages and towns of Ya’bad, Marka, Zababda, and Msalya, near Jenin.

In Nablus, in northern West Bank, the soldiers abducted Mohammad Salama, from his home in the al-Quds Street in the city, in addition to Mohammad Abu Hantash, Khaled Hashash, and Azzouz Hashash, from their home in Huwwara town, south of the city.

In addition, the soldiers also abducted Afeef Nasser Shallouf, from Salfit in central West Bank, after stopping him at a traffic accident that led to the death of an Israeli colonialist settler, near Yitzhar illegal colony, south of Nablus.

In the al-‘Isawiya town, east of occupied Jerusalem, the soldiers searched many homes and abducted Mahmoud Abu Roumi, 25.

The soldiers also abducted a former political prisoner, identified as Abdul-Aziz Khaled Damdoum, 20, from his home in the al-Eizariya town, east of Jerusalem.