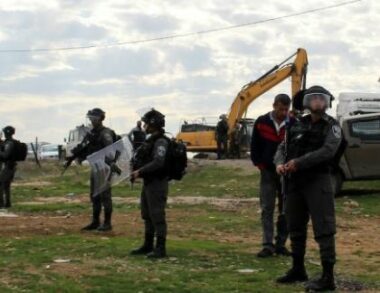 Fuad al-‘Amour, the coordinator of the Protection and Steadfastness Committees, said the soldiers confiscated two tents, used by the Palestinians as a rest area for locals and visitors.

He added that the tents are in the Tomin community, east of Yatta, not far from the military base and Susiya illegal colony, built on private Palestinian lands.

It is worth mentioning that the soldiers frequently invade Palestinian communities in Hebron, especially those used by Bedouins and shepherds in various villages in the Masafer Yatta area, and repeatedly demolish them.

On Wednesday at dawn, the soldiers abducted 29 Palestinians from several parts of the West Bank, including Jerusalem