Child Suffers Amputations In His Fingers Due To Explosive 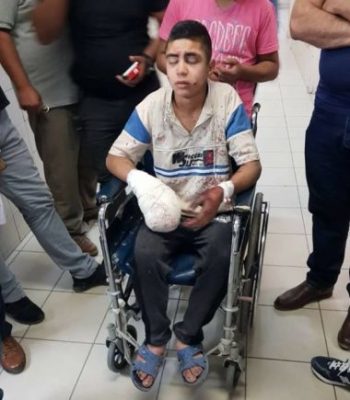 Palestinian medical sources have reported that a child suffered amputations of fingers in his hand, after an explosive object, believed to be dropped by the Israeli army, detonated near him, in the Old City of Hebron, in the southern part of the occupied West Bank.

The child Abdul-Mohaymin Abdul-Mohsin Dweik, 14, suffered amputation of three fingers in his right hand, and serious injuries to two fingers.

Dweik also suffered to numerous cuts and bruises to several parts of his body, including his head, before he was rushed to Hebron Governmental Hospital.

It is worth mentioning that many Palestinians, including children, have been killed or seriously wounded, when explosives, dropped by the army during training, detonated near them, in Hebron, the Jordan Valley and several parts of the occupied West Bank.

In January of this year, the soldiers shot a Palestinian child with a live round in the head, during “military training” near Tubas.